Air Force One is one 'spiffy ride,' Obama says

(CNN) -- During the first couple of weeks of his presidency, Barack Obama has made good use of his "spiffy" new ride. 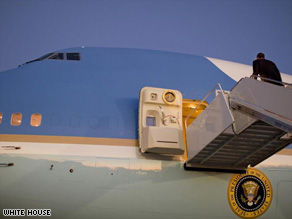 President Barack Obama walks onto Air Force One for his first flight as commander in chief.

The president, who has made several trips around the country in Air Force One, was particularly excited during his first trip on the plane as commander in chief when he flew recently to the House Democrats' annual retreat in Williamsburg, Virginia.

"Thanks for giving me a reason to fly Air Force One," he told the House Democrats after his flight, which took him away from a week of fighting for the economic stimulus bill.

Donning a blue jacket with the presidential seal on the right and his name embroidered on the left, Obama came back to the press section of the plane shortly before taking off for Williamsburg. WhiteHouse.gov: Obama's first flights slide show

"Hey guys, what do you think of my -- this spiffy ride here?" the president asked the group of reporters traveling with him on the presidential plane.

Riding aboard Air Force One is a treat for the president, but also for the reporters covering the White House, said CNN's Ed Henry.

"I'm always amazed that every time someone finds out what my job is, without fail, their first question is: 'Do you get to fly on Air Force One?' " Henry said. "There is a wonder and mystery about this plane that is just remarkable."

As president, Obama's first ride on the helicopter Marine One to Andrews Air Force Base, where Air Force One is kept, also seemed to leave him impressed.

"It's spectacular," Obama said. "You go right over the Washington Monument, and then you kind of curve in by the Capitol. It was spectacular."

Obama also flew on the plane from Chicago, Illinois, to Washington for his inauguration, but it wasn't called Air Force One, because Obama was not yet the president. He also had previously been a guest on Air Force One when his predecessor, former President Bush, was in office.

Each president gets his own pilot and Obama met his on that first trip to Washington.

"You're out of central casting, you're exactly what I want the pilot of Air Force One to look like," Obama joked.

The aircraft is maintained and operated by the Presidential Airlift Group, which falls under the White House Military Office.

It was founded at the request of President Franklin D. Roosevelt in 1944 and originally called the Presidential Pilot Office, according to the White House Web site.

During the next two decades, different propeller planes served as the main transportation for the president. That was until President Kennedy became the first to travel in his own jet aircraft, which was a modified Boeing 707, according to the site.

The current plane was first used in 1990 during the administration of President George H.W. Bush.

The aircraft, which is longer than the length of a hockey rink, has 4,000 square feet of floor space stretched across three levels. The plane includes a large suite for the president that includes an office, bathroom and conference room. It also provides sleeping quarters for the president.

The plane has two food preparation galleys that can feed 100 people at a time and a medical suite that can be used as an operating room, according to the site.

While the plane does have its luxuries, plenty of the extras are devoted to security.

Air Force One can refuel in midair, has unlimited range and has electronics "hardened to protect against an electromagnetic pulse," according to the White House site.

In the event of an attack on the country, the plane, equipped with advanced and secure electronic communications equipment, can become the president's mobile command center.

"[The president] has the ability to run the country from Air Force One," said Col. Mark Tillman, who flew the plane for former President Bush during the last eight years, including after September 11, 2001, and into Baghdad, Iraq. "So he has everything that's available to him at the White House available to him at 45,000 feet."

On occasion, press briefings take place aboard the aircraft.

Henry recalled an instance when he was taking off from Egypt and Secretary of State Condoleezza Rice briefed reporters on the trip.

"I'm struck by the history of standing in the aisle just two feet away from the secretary of state," Henry said.

"Until we hit some turbulence and I'm suddenly hanging onto the edge of a seat praying, 'Please God don't let me slam into the secretary of state in the aisle of Air Force One -- my mom will never forgive me.' I held on for dear life and the secretary kept her balance and the mini press conference went on without a hitch 30,000 feet in the air."

Henry said so far, Obama has made more of an effort to visit the back of the plane and talk with reporters than President Bush did.

"So far, President Obama has come to the back of the plane to chat with reporters on each one of his early trips aboard Air Force One, and he's even taken some questions on the stimulus bill," he said.

"But it's relatively easy to do that in the early days when you have legislation to sell. Will he still visit the media two years from now when the newness has worn off and maybe he's a little tired of the media?"

Some reporters along for the ride on Air Force One have started to Twitter their experiences and solicit questions from the public to ask Obama during the flight. Time.com: Swampland blog: More from the dept. of not Bush: Aboard Air Force One

Air Force One and its staff are known for their food preparation. In the galley, the staff often keeps a list of the way many of the regular passengers take their coffee, so they can get it right without having to ask.

"One of the best parts of Air Force One is the staff. All of the Air Force stewards treat everyone with respect, and they are the consummate professionals," Henry said.

"They go out and shop for all the food they bring on Air Force One so they can prepare special meals not just for the president, but for all the passengers. Whether it's Texas chili or chicken parmigiana, they always take good care of their passengers."

Obama tried the food during the flight to his inauguration.

"Let's see how you do a burger," Obama joked aboard the plane.

The president asked for a healthy side of salad and vegetables as well, prompting the waiter to ask if that meant he would skip the french fries.

All About Barack Obama • Air Force One • George W. Bush