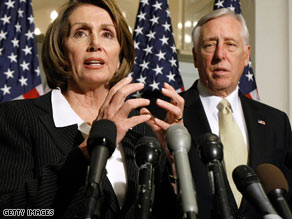 The vote will be held open for the arrival of Sen. Sherrod Brown, D-Ohio, who will be attending a wake for his mother until about 8 p.m., Reid said.

The House, which had planned to vote on the package Thursday, delayed it until Friday after many rank-and-file Democrats who were unhappy with some spending cuts demanded time to read the compromise measure.

But House Speaker Nancy Pelosi said Thursday she was pleased with the outcome of the negotiations on the stimulus compromise, saying the legislation the House will be voting on Friday is "transformational."

House Democratic leaders earlier were forced to delay until Friday a vote on the $789 billion economic stimulus bill after many rank-and-file Democrats who were unhappy with some spending cuts demanded time to read the compromise measure.

The stimulus deal was struck Wednesday after a furious day of negotiations on Capitol Hill involving House and Senate leaders, administration officials and a trio of moderate Republicans.

Pelosi said Thursday she is "very pleased with the outcome" of the negotiations.

She said she and her colleagues wanted to see the language of the compromise before officially signing on to it, particularly parts dealing with the education funding.

"We wanted to take all the time that was necessary, though, to know that it is right because, as I said, we will be accountable for this. I don't want to come to you later and say, 'We thought it said yes and it said no,' " she said.

Members of two liberal factions, the Congressional Progressive Caucus and Congressional Black Caucus, earlier told their Democratic leaders they were not pleased with the compromise spending bill and that they need sufficient time to read the voluminous legislation before voting on it.

"My fear is that it will be enough to slow but not stop our descent into a real depression," said Rep. Jerry Nadler, D-New York, a member of the Progressive Caucus.

Nadler would not say whether he'd support the measure.

"Considering the Senate is ruled by the filibuster -- we did about the best we could. It will save 3.5 million jobs."

Another member of the Progressive Caucus, who requested anonymity, said the Thursday morning meeting was a "venting session," adding with a wry smile, "In my career, I've never seen so much money and so many angry people."

Pelosi, however, said Thursday that, "We're proud of the product ... this is historical and transformational."

"While we would have liked to had more Republican support for it, and hopefully we will, we stand as Democrats ready to be accountable to the American people for this legislation and for the results we predict it will bring," she said.

Congress expects to send the stimulus package to Obama's desk by the Democrats' self-imposed deadline of Monday.

One day after securing an agreement on the bill, Senate Majority Leader Harry Reid, D-Nevada, was calling other Republican centrists in an attempt to persuade more of them to vote for the measure.

The Senate's version of the bill narrowly passed 61-37 on Tuesday with the votes of three moderate Republicans.

Of the 219 Republicans in Congress, they were the only ones who backed the bill.

Reid was looking for additional votes out of an abundance of caution, an aide said, after learning that Sen. Edward Kennedy, D-Massachusetts, who returned to Capitol Hill for votes earlier this week, has returned to Florida to continue his recovery from brain cancer and won't be here for a final vote on the stimulus bill.

With Kennedy, the Senate bill passed with one vote more than needed.

Reid is concerned that if a Democratic senator gets sick, or has some other unforeseen obligation, he could have trouble getting the bill passed, the aide said.

Reid is also concerned because the three GOP moderates who supported the bill -- Sens. Olympia Snowe and Susan Collins of Maine and Arlen Specter of Pennsylvania -- suggested they did not want to provide the decisive 60th vote for passage, the aide said. That likely would happen without Kennedy voting.

So far, there's no indication Reid has won any more GOP votes for the measure. But an aide to one of the Republican moderates, who asked not to be identified, doubted any of the three would drop off.

Here's how the compromise bill is expected to affect individuals: CNNMoney: How the stimulus will affect your wallet

Democratic sources said 35 percent of the bill deals with tax cuts and 65 percent with spending.

All About National Economy • U.S. Senate