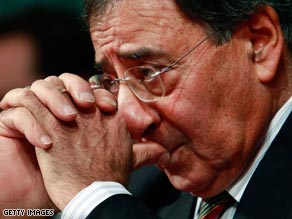 Leon Panetta, 70, will become the oldest person to head the CIA.

Panetta, 70, will become the oldest person to head the spy agency.

Sen. Dianne Feinstein, chairwoman of the Senate Intelligence Committee, which passed Panetta's nomination on to the full Senate on Wednesday, said at that time that Panetta would mark a "new beginning" for the CIA.

"He has the integrity, the drive and the judgment to ensure that the CIA fulfills its mission of producing information critical to our national security without sacrificing our national values," the California Democrat said.

Panetta was an eight-term congressman from central California who chaired the powerful House Budget Committee before moving over to the Clinton White House as the budget director. He later became President Clinton's chief of staff.

During his confirmation hearing last week, Panetta was peppered with questions about the Bush administration's controversial interrogation, detention and rendition program and President Barack Obama's efforts to change the policy.

Obama has signed an executive order limiting interrogation techniques to the 19 outlined in the Army Field Manual, but Panetta conceded those might not be enough. He said he would not hesitate to go to the president and ask for additional authority if there was "a ticking-bomb situation."

Panetta vowed not to send terrorism suspects to other countries where they could be tortured. But he insisted such renditions are an "appropriate tool" if the United States got assurances from the receiving country that the individuals would not be treated inhumanely.

Regarding Obama's plan to close the U.S. detention facility at Guantanamo Bay, Cuba, he said the task is a very difficult one. Although some prisoners will be tried and others transferred to other countries, he acknowledged there may be a group of prisoners who will have to be detained without trial for a long time.

Panetta's nomination initially created a stir among Democrats and Republicans, who questioned the advisability of appointing someone with his lack of experience in the intelligence community at a time when the United States is fighting two wars and battling terrorists. But his intelligence background was barely mentioned at his confirmation hearing.

Panetta was not believed to be the first choice to head the spy agency. John Brennan, a career intelligence officer who last headed the National Counter Terrorism Center, was the leading candidate until liberal bloggers effectively torpedoed the nomination by linking Brennan to the CIA's enhanced interrogation techniques and the pre-emptive war in Iraq.

Brennan was subsequently appointed by Obama to be his homeland security adviser at the White House, a position that does not need congressional approval.