On CNN's "State of the Union," CNN host and chief national correspondent John King goes outside the Beltway to report on the issues affecting communities across the country. King recently traveled to Peoria, Illinois, to explore how the recession is hitting the blue-collar town hard. 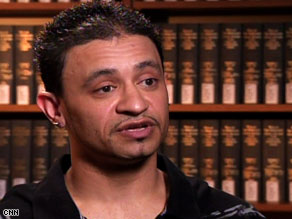 Chris Guynn says he's grateful that his wife has a full-time job while he studies for life after Caterpillar.

Schools, roads and bridges will take shape because of stimulus funding, he said, and workers here will be supplying the heavy equipment needed to build them.

"Yesterday...the head of Caterpillar said that if Congress passes our plan, this company will be able to rehire some of the folks who were just laid off," Obama said.

It was a pitch with big appeal for the blue-collar crowd. This city's motto -- "It's Better Here" -- no longer matches the mood in a place where the recession hit late, but is now hitting hard.

"I just felt, I thought I couldn't lose with this company" is how Chris Guynn described his motivation for moving his wife and two children to Peoria, Illinois, from Las Vegas, Nevada.

There was a job waiting at Caterpillar, and "It was a company that you could just retire with, great pension, retirement, 401 and so on."

Guynn is one of 20,000 workers Caterpillar will shed by the end of the first quarter of 2009, a decision the company announced last month. The company says the job cuts are necessary because of a decline in orders that it attributed to the U.S. and global recession.

Guynn is enrolled in classes at Central Illinois College and is grateful his wife has a full-time job at a local call center.

He was nervously waiting to find out not if, but when, his last day would be. The shoe dropped when 814 employees at the Mossville plant arrived at work to learn it was their final day.

There was more bad news: Caterpillar announced that it is eliminating an additional 2,110 jobs at three Illinois plants because of falling demand.

To visit Peoria is to meet the faces behind the numbers of rising new claims for unemployment benefits.

"When we say we've lost 3.6 million jobs since this recession began -- nearly 600,000 last month alone -- when we talk about the 22,000 layoffs announced here at Caterpillar, a company that has sustained this community for more than 80 years and that had one of its banner years just last year, you know this isn't about figures on a balance sheet, it's about families that many of you probably know," the president said Thursday.

Watch more on the pain in Peoria »

Guynn follows the news and knows about the major economic stimulus package. He is skeptical when he hears that politicians are looking to spend more than $800 billion, yet he does voice faith in the new president who calls Illinois home.

"I believe he's going to help it out," Guynn said. "Everyone is worth giving that chance to. ... I want to give him a fair shot. I know it's not going to happen overnight, but I'm willing to see what he's going to do."

As Obama works to meet those high expectations and deal with mounting conservative criticism of his approach, Guynn is hoping his classes eventually land him a new career as a crime lab technician.

"I'm 36 years old. I've waited many years to get back into school, but finally I'm doing it. This is the perfect time," he said. "I'm not happy to get laid off, but at the same time, I'm looking to further myself with a better career."

She is a single mother of five children, ranging in age from 5 to 14. Not having a second income to help cushion the blow of losing her job at Caterpillar adds to the stress, something Williams vows to keep hidden from her children.

To that end, she waited until the end of her two-week notice before telling them Mom would suddenly be spending more time at home.

"I don't let them see that I'm stressed out about things," Williams told us as her two youngest watched television in a lower-level family room of her Peoria home.

"I waited. I didn't tell them right away. The two 5-year-olds, I didn't think they would understand what that meant anyway. So I just waited until I was done working, and then I said, 'Things are going to be a little bit different. I'm going to be home in the morning, you know, when you go to school and when you get home from school.' And we've just kind of gone that route."

Williams, who worked as an administrative assistant, had never been laid off. She has a four-year college degree and initially was optimistic that she would quickly find work. Now, with about 10 weeks of unemployment benefits left and a bleak job market, Williams is getting more nervous and keeping an even more watchful eye on the family budget.

"Just everything in general has been, had to be cut back," she says. "I really went into it thinking I would have a much easier time finding a new job. Looking for something, I thought it was going to be easier for me than it has been."

Williams shrugs when asked how the politicians in Washington could help her with an economic stimulus package and says she is beginning to compromise in her job search, looking for openings in retail sales or other positions that would pay her less than at Caterpillar but allow her to keep up with the mortgage and feed her children.

"I'm very nervous," Williams said. "I'm very nervous of what will be available, and every day on the news, there's more layoffs that are being shown, in our town as well as the nation."

But there is a reason the recession hit late here: Half or more of Caterpillar's business is tied to overseas exports, and only recently has the global slowdown caught up with the squeeze many American manufacturers were already feeling at home.

"We're worldwide," Caterpillar employee Jim Lierle said during a walk on the factory floor in East Peoria. "I don't know why our government wouldn't support us, too. ... We've got to have that market. We've got to have it. Fifty percent of these tractors will go overseas. We can't lose that. If we lose that, we're gonna go down."

His 39 years at Caterpillar protect Lierle from the current plan to shed 20,000 jobs, but he knows many of the workers who are gone, or who will be let go over the next couple of months, and worries that a way of life in blue-collar industrial towns like Peoria is coming to an end.

Like many, Lierle hopes a new administration in Washington will help bring an economic turnaround. But he is more reserved than many here when it comes to rating the new president.

"I respect the rank, but the man has to earn respect from me," Lierle said. "I don't give respect. They have to earn it. And so far, I haven't seen a whole lot that anybody's earned. ...I'm not going to judge the man yet. I'll see what he does. Give him the benefit of the doubt. See what he comes up with. The way he's talking, he's made a lot of promises. It's gonna be hard to fulfill all those promises. And he's sure not gonna do it in the first six months.