WASHINGTON (CNN) -- The nation's new chief intelligence officer delivered the annual threat assessment to the Senate Intelligence Committee on Thursday, but his first topic was the economy. 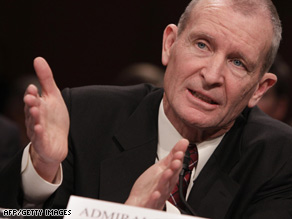 Dennis Blair said the worldwide effects of the economic crisis could lead to instability in governments.

"The primary near-term security concern of the United States is the global economic crisis and its geopolitical implications," said Dennis Blair, who was approved last month as the director of national intelligence for President Obama.

Blair said the worldwide effects of the economic crisis -- from countries cutting back on their defense obligations to their mishandling of humanitarian issues -- could lead to instability in governments.

"Time is probably our greatest threat," Blair said in prepared remarks released before he spoke to the committee. "The longer it takes for the recovery to begin, the greater the likelihood of serious damage to U.S. strategic interests."

In his first appearance before Congress in his new post, Blair addressed topics ranging from cyber-terrorism to al Qaeda.

Asked by committee member Sen. Ron Wyden, D-Oregon, about the possibility of a cyber-terrorism attack on the nation's power-grid system, Blair said that "a couple of years ago, (it would have been) a piece of cake."

Changes and security upgrades in the system have reduced the possibility of a debilitating attack on the power system, Blair said.

But "a very skilled attack by a group that knew what it was doing could cause us some problems, so there's work still to be done there," he said.

Extremist Muslim groups still pose the biggest threat for terrorist attacks, but there has been "notable progress" in turning Muslim opinion against such groups, including al Qaeda, he said.

"Because of the pressure we and our allies have put on al Qaeda's core leadership in Pakistan and the continued decline of al Qaeda's most prominent regional affiliate in Iraq, al Qaeda today is less capable and effective than it was a year ago," he added.

Regarding Iran's nuclear-development capabilities, Blair said that nation "is clearly developing all the components of nuclear material." He estimated that Iran could produce a nuclear weapon by 2015.

The United States and other Western nations believe Iran is pursuing a nuclear weapons program, but Iran says it is developing nuclear capability to produce energy.

International pressure will be the main factor in getting Iran to drop any nuclear military aspirations, Blair said.

"Whether they (Iran) take it all the way to developing nuclear arms and becoming a nuclear power -- I don't think it's a done deal either way," he said.

But he added that getting Iran to stay away from nuclear military development will take a concerted international effort.