WASHINGTON (CNN) -- Negotiators have worked out a disagreement between the Senate and House over education funding in the economic stimulus bill, Democratic leadership sources said Wednesday evening. 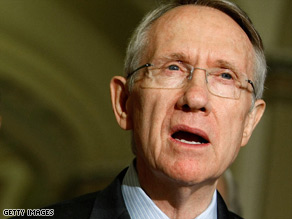 Senate Majority Leader Harry Reid met with House Speaker Nancy Pelosi to iron out a snag in the bill.

Details on how they settled it were not immediately available. Word that the final snags were being untangled came after back-and-forth reports Wednesday on the massive relief package's status.

Senate Majority Leader Harry Reid had announced a compromise bill early Wednesday afternoon. But about 90 minutes later, aides to House Speaker Nancy Pelosi said that, although Pelosi had known Reid was planning the announcement, the two were meeting again to iron out differences over a provision on education spending.

Senators had cut a plan to provide direct funding for school construction -- a priority for some Democrats -- and instead set aside money for governors to use on school modernization and rehabilitation. House Democrats did not believe that money would ultimately be targeted enough to school districts in need.

In the version announced by Reid, $10 billion had been added to the $44 billion previously allocated toward "state stabilization" to help school infrastructure.

Using that state stabilization vehicle, the money would be given to governors to parcel out. But aides say House members would rather this $10 billion go through Title I, which would allocate the money based on need.

Senate and House leaders and Obama administration officials met to find yet another compromise.

After the disagreement was cleared, President Obama issued a statement saying: "I want to thank the Democrats and Republicans in Congress who came together around a hard-fought compromise that will save or create more than 3.5 million jobs and get our economy back on track."

Four Democratic sources told CNN that Pelosi was angry when Reid called to tell her he was making his first announcement that the deal was done. One administration official said House leaders didn't like the idea that Senate Republicans were effectively dictating to them the terms of the proposal.

After Reid announced the first compromise, Sen. Max Baucus, D-Montana, said it could be taken up by the two houses as early as Friday, meeting Obama's timetable of having the bill on his desk by Monday.

"The bills were really quite similar, and I'm pleased to announce that we've been able to bridge those differences," Reid said. "Like any negotiation, this involved give and take, and if you don't mind my saying so, that's an understatement."

He praised the three "brave" GOP senators who broke ranks to support the bill: Sens. Susan Collins and Olympia Snowe of Maine and Sen. Arlen Specter of Pennsylvania.

Of the 219 Republicans in Congress, they were the only three to back the bill.

"Today we have shown that, working together, we can address the enormous economic crisis facing our country," Collins said.

She said the compromise bill has a price of $789 billion, less than both the House and Senate versions.

Sen. Ben Nelson, D-Nebraska, summed it up as a "jobs bill."

"Today you might call us the 'jobs squad,' " said Nelson, one of the key negotiators on the compromise. "Because that's what we're attempting to do: to make sure that people will have the opportunity to hang on to their jobs that they have today, and they'll be able to get jobs if they lose their jobs."

Collins on Wednesday provided details of some of the measures she expects to be in the final bill:

Democrats in the Senate must hold on to at least two Republican votes to get the 60 votes needed to keep GOP opponents from blocking the bill. Not a single Republican voted in support of the House version of the bill, but the House Democrats had enough votes to pass it, despite 11 Democrats voting against it. iReport.com: Share your thoughts on the stimulus package

"You couldn't pick up one Republican in the House, and you lost 11 Democrats. You've lost more Democrats than you've picked up Republicans. That's not bipartisanship," he said Wednesday on CNN's "The Situation Room."

The three Republican senators who voted in favor of the package indicated Wednesday that they were pleased with the agreement.

"As I said, unless the bill remained virtually intact from what the agreement was last Friday, my support would be conditional on that, and we got there," said Specter. "I think it is an important component of putting America back on its feet."

Specter, who is up for re-election in 2010, said earlier Wednesday he's aware of the political danger he's putting himself in, but action is needed to pump up the ailing economy.

"I understand the peril, but I didn't run for the United States Senate to further my own political interests," he said on CNN's "American Morning."

Asked about the possible political backlash from his vote supporting the bill, Specter said, "It's a good plan. Not a perfect plan, but a good plan and I'll take my chances."