(CNN) -- She's being hailed as the "face of the economic crisis," and now Henrietta Hughes has become something of a media star after reaching out to President Obama in an emotional plea for help. 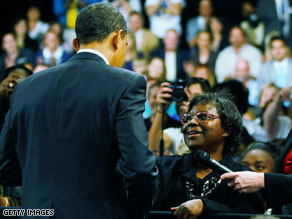 Her message: My son and I are homeless, and we need immediate help.

"I have an urgent need, unemployment and homelessness, a very small vehicle for my family and I to live in," Hughes told Obama Tuesday at a town hall rally in Fort Myers, Florida, as he pushed for passage of his stimulus plan in the Senate. "The housing authority has two years waiting lists, and we need something more than the vehicle and the parks to go to. We need our own kitchen and our own bathroom. Please help."

Hughes said she had been homeless after her son lost his job and, subsequently, their home. Although her son has been looking for work, Hughes says, so far, no luck.

According to the White House, the area had the highest foreclosure rate in the nation last year, with 12 percent of housing units receiving a foreclosure-related notice.

And nearly 12,000 jobs have been lost in Fort Myers in the past year.

The president offered Hughes a kiss on the cheek and a promise: "We're going to do everything we can to help you, but there are a lot of people like you."

Some questioned the circumstances of Hughes' appearance at the event.

Blogger Michelle Malkin, in a story on the conservative Web site TownHall.com on Wednesday, said that if Hughes "had more time, she probably would have remembered to ask Obama to fill up her gas tank, too."

"The soul-fixer dutifully asked her name, gave her a hug and ordered his staff to meet with her. Supporters cried, 'Amen!' and 'Yes!' " she added.

One reader questioned Hughes' motives and asked how the homeless woman got to the rally at all.

"How does a 61-year-old homeless woman who's living in a pickup truck with her son JUST HAPPEN to get a ticket so she can VERY PUBLICALLY ask Prez. Obama for a HOUSE? Anyone? Who pushes her up on stage? She's right at the front of the crowd. Did she just happen to get a seat there?" asked reader Erik E.

In Fort Myers, a city of about 60,000, people began lining up for tickets to the Obama event over the weekend. Many camped out overnight, with tents and sleeping bags springing up near the front door, and all tickets were given away in less than an hour.

White House spokesman Joshua Earnest said Wednesday that after she spoke, the administration connected Hughes -- who did not vote in the 2008 election because she didn't have a home -- with local housing officials, who happened to be in the crowd.

On Wednesday, the head of the local housing authority, Marcus Goodson, said he met with Hughes. He said he's working on finding her a housing unit with a shorter waiting time and that he's emailed a White House staff member with the update.

But it wasn't just officials reaching out.

Chene Thompson -- the wife of state Rep. Nicholas Thompson, R-Fort Myers -- offered Hughes and her son a house in nearby La Belle rent-free, according to a spokeswoman, and she is interested in taking it.

"Basically, I offered Ms. Hughes and her son the opportunity to stay in my home rent-free for as long as they need to," Thompson told WBBH-TV in Fort Myers. "I'm not a millionaire, I'm not rich, but this is what I can do for someone if they need it."

Hughes will check out the house in the coming days, according to Thompson's office. In the meantime, she has set up shop in the district office where she gave media interviews.

And help for the woman whose story touched the president keeps pouring in.

A Web site, HenriettaHughes.com, was set up featuring video clips of the homeless woman at the rally and information about her plight. The site hails her as "the face of the economic crisis."

The owner of the site said Hughes has "brought to [light] the homeless [an] unemployment problem we have in the United States."

"As a local southwest Florida resident, I have seen countless stories like Henrietta's. I wanted to take this opportunity to promote awareness of our plight on a national level. If you as equally concerned as I am, please bookmark this site and sign up for updates," the owner wrote on the site. iReport.com: Share your thoughts on the stimulus package

And Fort Myers Mayor Jim Humphrey, a Republican, said Wednesday that his "community has responded" to Hughes' story.

"I even received a phone call from a lady in Ocala wanting to offer her $50 a month, so what we're seeing is, this should be a nonpartisan issue," he said.

Linda Bergthold, a health policy expert, wrote on the liberal blog HuffingtonPost.com that it was a touching moment that highlighted a community coming together.

"It would have been interesting had Obama turned to the crowd and asked anyone who had a solution for Henrietta to step forward afterwards. But he didn't have to. People came forward anyway," she wrote Wednesday. "The dilemma Ms. Hughes described is not limited to her. ... Her request was a compelling one and it only highlights issues of homelessness that will surely get worse as the economic downturn deepens."