Commentary: You can blame Pelosi for Democrats' stumbles

Editor's Note: Jack Cafferty is the author of a new book, "Now or Never: Getting Down to the Business of Saving Our American Dream," to be published in March. He provides commentary on CNN's "The Situation Room" daily from 4 p.m.- 7 p.m. You can also visit Jack's Cafferty File blog. 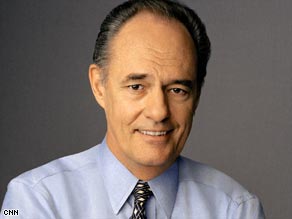 Jack Cafferty says House Democrats got the economic stimulus plan off to a poor start.

NEW YORK (CNN) -- Well, that didn't take long. Three weeks into the new administration and the Democrats are squandering their advantage and threatening to snatch defeat from the jaws of victory.

Credit House Speaker Nancy Pelosi for getting the ball rolling. Under her leadership, House Democrats excluded Republicans from having any voice in crafting the stimulus package.

Acting like children who hadn't seen Santa Claus for eight years, House Democrats busily loaded up the bill with stuff they had been unable to get for eight years. It was payback time.

Contraception, funding for the arts, restoration of the national mall, stop-smoking programs. All while Americans lose their homes, their jobs, and their savings. It was both childish and disgraceful.

Apparently tone deaf to the disgust and disappointment of Americans with the bailout package for Wall Street and the banks last year, as well as the voters' strongly stated desire for change as represented by the election of Barack Obama, House Democrats set the table for failure -- again.

Not a single Republican in the House voted for the bill, despite efforts by our new president to reach out to the other side. Nancy Pelosi strikes again.

When asked if the lack of Republican support was at least partly her fault, she gave some snotty answer about not being partisan but working for the American people. Right.

My guess is President Obama is busy these days sticking pins in his Nancy Pelosi doll. To his credit, Obama argued against a lot of the pork while stressing that time is our enemy. Pelosi could care less.

As the legislation headed for the Senate amid cries for more stimulus and less pork, the Republicans pounced. Sensing yet another Democratic miscalculation, the Republicans seized the advantage in the debate.

They want more tax cuts and more real stimulus -- stuff that will create jobs now. Not some pie in the sky proposal that may pay dividends years down the road. And they're right.

The real game starts if and when the Senate passes a bill devoid of a bunch of the garbage the House Democrats stuffed into it. Then it goes to a conference committee where the drama will be whether, in a grand twist of irony, President Obama and the Republicans wind up aligned against members of the Democratic Party in an effort to get something realistic on the table before the economy simply slides the rest of the way into a deep crevasse.

Meanwhile, angry voters are jamming Capitol Hill phone lines screaming about the politics as usual that is so far the hallmark of the new administration. Welcome to Washington, Mr. Obama.

When it comes to the Democrats under Nancy Pelosi, what was it Pogo used to say? "We have met the enemy and it is us."