(CNN) -- The Obama administration's $838 billion economic stimulus plan survived a key vote in the Senate, putting a compromise version of the bill on track for passage Tuesday. 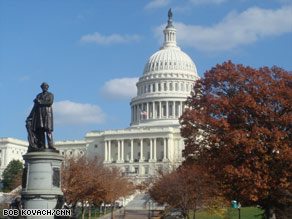 The Senate is expected to vote on the stimulus bill Tuesday.

With the help of Republican Sens. Susan Collins, Olympia Snowe and Arlen Specter, the Democrats locked in the votes needed to end debate on the bill.

The bill is expected to survive a full vote in the Senate on Tuesday, setting up a battle with the House as the two chambers try to iron out differences between their versions of the bill.

"My support for the Conference Report on the stimulus package will require that the Senate compromise bill come back virtually intact including, but not limited to, overall spending, the current ratio of tax cuts to spending, and the $110 billion in cuts," Specter said in a statement later in the day.

Obama wants both chambers to come to an agreement so he can have the bill on his desk by Presidents Day, which is next Monday.

The House's $819 billion stimulus bill passed without a single Republican vote nearly two weeks ago. Senators spent the past week debating amendments. Late Friday, a working coalition of Democrats and some Republicans reached a compromise that trimmed billions in spending from an earlier version.

The president has been trying to sell the plan, with town hall meetings in Indiana and Florida, as well as a prime time news conference Monday night.

"Every economist agrees that the government spending in a recession is essential," said Sen. Claire McCaskill, D-Missouri. "So this bill isn't perfect, but it's essential."

In the Senate, the only way Democrats could lure some of the needed Republican votes was by slashing spending, but House Democrats are balking because a big chunk of those cuts are aimed at education.

For example, the Senate sliced $40 billion in funding to the states to help local officials avoid cutbacks in education and other services. The Senate also eliminated $19 billion for school construction and cut early education funding in half.

The Senate version of the bill also makes changes to the president's signature middle class tax cuts. Obama had campaigned on tax breaks for those making $75,000 or less. The Senate version provides tax breaks for individuals making $70,000 a year or less or for couples making $140,000 a year or less. That's different than the $150,000 in the House bill.

The Senate also has a $70 billion one-year provision to patch the AMT, the alternative minimum tax. The tax was intended to place a tax on the wealthy but now hits many middle-class families.

In the House, several members are trying to work toward a consensus. "Nobody should say, 'It's my way or the highway,'" said Rep. Chris Van Hollen, D-Maryland. "At this point in time, let's get something big and done now."

Here are some other differences between the two bills:

When Obama spoke with House Democrats last week, he urged them to "not make the perfect the enemy of the essential"

One dissenting voice in the Senate is Republican Sen. John McCain, Obama's opponent in the presidential race. The Arizona senator called the bill "generational theft."

"We're laying multitrillion dollars of debt on future generations of Americans," McCain said on CBS. "I can't support such a thing."

"We are going down a road to financial disaster. Everybody on the street in America understands that," he said Sunday on CNN's "State of the Union."

"This is not the right road to go. We'll pay dearly," he said.

The nonpartisan Congressional Budget Office reported last week that the stimulus measure, as it's presented now, is likely to create between 1.3 million and 3.9 million jobs by the end of 2010, lowering a projected unemployment rate of 8.7 percent by up to 2.1 percentage points.

But the CBO warned the long-term effect of that much government spending over the next decade could "crowd out" private investment, lowering long-term economic growth forecasts by 0.1 percent to 0.3 percent by 2019.