WASHINGTON (CNN) -- U.S. senators spent part of Saturday debating the massive economic recovery package after a group of lawmakers reached a compromise agreement that trimmed billions in spending from an earlier version. 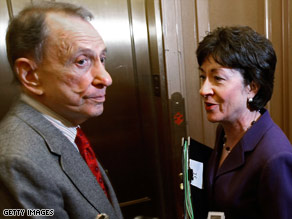 The senators debated from noon to about 3:45 p.m. ET and will return Monday afternoon for more discussion. A vote could come Tuesday on the plan, which President Obama has touted as a tonic for the nation's badly battered economy.

However, there were strong opinions on both sides of the debate.

"If you knew a bill in the U.S. Senate would cause a recession in 10 years, would you support it?" asked Sen. Jon Kyl, R-Arizona. "That's what the Congressional Budget Office, the bipartisan office that supports our efforts in the Congress, says about this legislation. ... There will be negative [gross domestic product] in this decade as a result of this legislation."

Sen. Barbara Boxer, D-California, told opponents of the bill to "get over it."

"Come and talk to us. Come and work with us," Boxer said. "This election was about change, not the same old trickle-down tax cuts that don't work. Yes, there's 42 percent tax cuts in this bill. ... That's not enough for my friends on the other side. They want it all tax cuts, or most tax cuts. ... We tried it; it didn't work; it's gotten us where we are today."

The compromise agreement was reached Friday after days of private meetings between centrist Democrats and Republicans who felt that the $900 billion price tag on the Senate's earlier version was too high.

Watch how the senators spent their Saturday »

Senators had trimmed the plan to $780 billion in tax cuts and spending on infrastructure, housing and other programs that would create or save jobs.

"We trimmed the fat, fried the bacon and milked the sacred cows," said Sen. Ben Nelson, a Democrat, as debate began Friday.

However, Senate Majority Leader Harry Reid's spokesman Jim Manley said the deal will ultimately include two amendments that have already passed with broad support: a $15,000 tax credit for 2009 homebuyers and a tax deduction for those who purchase a new car. Those two measures bring the total to $827 billion.

The key vote will still be on the $780 billion package, with a final vote to come on the package plus the amendments later.

See how the House and Senate versions stack up »

Several senators said the compromise agreement axed money for school construction and nearly $90 million for fighting pandemic flu, among other things. A $7 billion item for energy-efficient federal buildings was cut in half. A Democratic leadership aide said a $55 million item for historic preservation was eliminated entirely, as was $122 million for U.S. Coast guard polar icebreakers and cutters.

Watch how close Senators are to a final deal »

The remaining spending includes more than $76 billion for education, including college Pell grants and help for states struggling to pay for their schools, $43 billion in transportation infrastructure and more than $3 billion for job training, according to the office of a senator involved in negotiations.

Tax cuts include incentives for small businesses, a one-year fix of the unpopular alternative-minimum tax and tax cuts for low-and-middle-income families, said Sen. Susan Collins of Maine, the most prominent Republican negotiator in the bipartisan talks.

"Our country faces a grave economic crisis, and the American people want us to work together," she said. "They don't want to see us dividing along partisan lines on the most serious crisis facing our country."

Putting more pressure on senators to act was news Friday that employers slashed another 598,000 jobs off U.S. payrolls in January, pushing the unemployment rate to 7.6 percent.

See where jobs could be created »

"On the day when we learned 3.6 million people have lost their jobs since this recession began, we are pleased the process is moving forward and we are closer to getting Americans a plan to create millions of jobs and get people back to work," White House spokesman Robert Gibbs said.

The Senate began considering amendments to the plan shortly before 10 p.m. Friday and adjourned about 12:40 a.m. Saturday.

Although Democrats appeared to believe that they had enough Republican support to push the compromise plan through, most GOP members still were speaking out against the plan, saying spending is not the answer to cure economic woes.

"This is not bipartisan," said Sen. John McCain, R-Arizona. "If this legislation is passed, it'll be a very bad day for America."

If the package passes the Senate, yet another compromise -- between the House and Senate versions -- must be hammered out before the legislation is sent to Obama to sign. Obama has said he would like to sign the stimulus by Presidents Day, February 16.