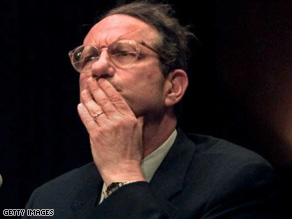 Deutch, who was President Clinton's CIA director for a year and a half in the mid-1990s, lost his security clearance for mishandling classified information.

At the time Deutch left the agency in late 1996, CIA security officials discovered top secret documents on Deutch's home computer, which was a violation of strict CIA policy.

The 74 classified documents included memos to the president and other cabinet officials as well as classified material from the time Deutch served as deputy defense secretary.

Deutch had reached an agreement with the Justice Department to plead guilty to a misdemeanor charge and pay a fine, but before the case was filed, President Clinton pardoned him.

Blair's decision came as a surprise to Leon Panetta at his confirmation hearings to be CIA Director. Sen. Tom Coburn, a Republican from Oklahoma, asked Panetta if he had been aware of the decision and whether he thought it was appropriate.

Panetta responded by saying he wasn't aware, but added, "I think I'd have to sit down and talk with Admiral Blair about just exactly what he had in mind."

When Coburn pressed him further about what kind of message the appointment sends to CIA employees, Panetta responded, "I don't want to jump to any quick conclusions ... but clearly, this is something I need to talk to him about."