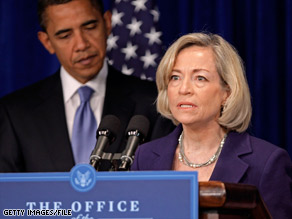 Nancy Killefer appears with then President-elect Obama at a news conference in early January.

The post is a new one, set up to help the incoming administration "scrub" waste from the federal budget. But in a letter to President Barack Obama, Killefer said her tax issue "could be used to create exactly the kind of distraction and delay those duties must avoid."

"Because of this I must reluctantly ask you to withdraw my name from consideration," she wrote.

Killefer was nominated to be deputy director of management at the Office of Management and Budget, and her duties as chief performance officer were added on. The OMB portion required her to be confirmed by the Senate.

A senior administration official told CNN that Killefer's tax issues dealt with household help, and that Obama aides had expected her to be raked over the coals after the Geithner and Daschle nominations. The official said that Killefer had been upfront about the matter and that Obama's staff had reviewed the questions raised and decided they were comfortable with her before the announcement of her nomination.

Geithner, whose office oversees the Internal Revenue Service, was confirmed after admitting that he had failed to pay in timely fashion more than $34,000 in self-employment taxes while he worked at the International Monetary Fund from 2001 to 2004. The issue was caught during a 2006 audit, and Geithner told the Senate that the debt was incurred unintentionally.

Daschle, who had been awaiting confirmation, previously had acknowledged that he failed to pay taxes on a car and driver provided by a friend and on $80,000 in consulting fees after he left the Senate. He called the matter a mistake and said he paid his taxes in full, but he announced Tuesday that he "will not be a distraction" to the administration. Obama said he accepted Daschle's withdrawal "with sadness and regret."

Killefer, a senior director at the management consulting firm McKinsey & Company, was nominated last month as Obama pledged to cut unnecessary spending and bring "a new sense of responsibility to Washington." Officials said her position would restore fiscal order and reform government.

"We can no longer afford to sustain the old ways when we know there are new and more efficient ways of getting the job done," Obama said in announcing her nomination.

The Congressional Budget Office announced last month that the deficit for the current budget year will be $1.2 trillion. Obama said at the time the government would have to "make tough choices" in the budget "to address both the deficit of dollars and the deficit of trust."

Killefer served as assistant secretary for management and chief financial officer of the Treasury Department during the Clinton administration.