WASHINGTON (CNN) -- President Barack Obama on Tuesday admitted he made a mistake in handling the nomination of Tom Daschle as his Health and Human Services secretary, saying Daschle's tax problems sent a message that the politically powerful are treated differently than average people. 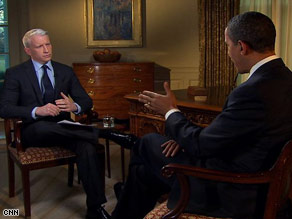 "I think I screwed up," Obama said in an interview with CNN's Anderson Cooper. "And, I take responsibility for it and we're going to make sure we fix it so it doesn't happen again."

Daschle had apologized Monday for what he said were honest mistakes, calling them an embarrassment. The series of errors included improperly reporting $15,000 in charitable donations, failing to list $80,000 in lobbying income due to what Daschle said was a paperwork error and not reporting a car and driver loaned to him by a friend and business associate as income.

Anderson Cooper and President Obama: one-on-one in the Oval Office. Can he keep his promises to taxpayers?
Tonight, 10 ET on CNN

Those tax issues, as well as questions over whether work he did after his stint in the senate amounted to lobbying, gave critics ammunition to question Obama's call for a culture change in Washington.

"Ultimately, I campaigned on changing Washington and bottom-up politics," Obama said. "And I don't want to send a message to the American people that there are two sets of standards -- one for powerful people and one for ordinary folks who are working every day and paying their taxes."

Watch the interview with the president »

Obama defended Daschle's original appointment, saying "nobody was better equipped to deal both with the substance and policy of health care."

Earlier, White House spokesman Robert Gibbs insisted Daschle had decided to withdraw on his own, not as a result of any prodding from the administration.

In a written statement, Daschle acknowledged the political problem he had created for the administration.

Still, Obama insisted the mistake was his.

"I take responsibility for it and we're going to make sure we fix it so it doesn't happen again," he said.

All About Barack Obama • Thomas Daschle