WASHINGTON (CNN) -- The Obama administration will provide an additional $20.3 million in humanitarian aid for Palestinians in Gaza, the State Department said Friday. 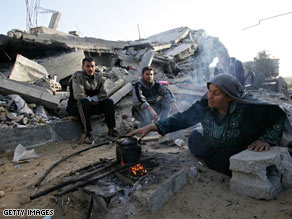 A Palestinian woman makes tea on a wood fire as she sits with her sons amid the rubble of houses in Gaza.

The aid will be distributed through the U.N. Relief and Works Agency for Palestine Refugees, the International Committee for the Red Cross and the United Nations Office for the Coordination of Humanitarian Affairs.

The three groups are distributing emergency aid, including food, medical assistance, temporary shelter, employment, and electricity and water to Palestinians in Gaza.

The announcement of the aid was also made by Special Envoy for Middle East Peace George Mitchell, who is traveling through the region, where he is conferring with Palestinian and Israeli officials in an attempt to maintain the Hamas-Israel cease-fire and restart a stalled peace process.

On Friday Mitchell held a roundtable with humanitarian agencies and was briefed on the situation in Gaza, acting State Department spokesman Robert Wood said.

Mitchell met Thursday with Palestinian President Mahmoud Abbas in the West Bank city of Ramallah and with Israel Defense Forces Chief of Staff Lt. Gen. Gabi Ashkenazi as sporadic fighting continued in Gaza, still smoldering in the aftermath of warring between Israeli soldiers and Hamas militants.

A tentative cease-fire between Israel and Hamas, which rules Gaza, began on January 21 after the three-week military operation. More than 1,300 Palestinians died and about 5,400 others were wounded. Thirteen Israelis, including 10 soldiers, were killed.

Mitchell told reporters in Ramallah that he told Abbas during a "lengthy discussion" of the need to pursue "a sustainable and durable cease-fire" and of Obama's "deep concern" over "the loss of Palestinian life and the humanitarian needs in Gaza."

While maintaining that Israel has a right to defend itself, both Obama and Secretary of State Hillary Clinton have spoken about the dire humanitarian situation in Gaza. Last Wednesday, when he named Mitchell as his envoy, Obama called for Gaza's border crossings to be reopened as soon as possible.

"I was deeply concerned by the loss of Palestinian and Israeli life in recent days and by the substantial suffering and humanitarian needs in Gaza," Obama said. "Our hearts go out to Palestinian civilians who are in need of immediate food, clean water, and basic medical care, and who've faced suffocating poverty for far too long."

Watch how Hamas is paying Palestinians who lost homes »

In a statement, the State Department said the United States is "working to develop a longer-term reconstruction/development effort" for Gaza with its international partners.