WASHINGTON (CNN) -- Smoking cessation programs make up $75 million of the economic stimulus bill making its way through the Senate, according to Sen. Tom Harkin, D-Iowa, who sponsored the funding. 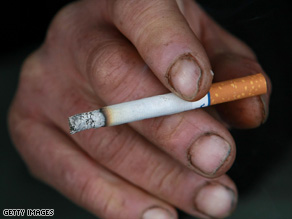 Harkin said the programs were an attempt to bolster the economy by lowering the soaring health-care costs smoking causes each year.

The money will be used to bolster existing anti-smoking campaigns run by the Department of Health and Human Services and to buy new equipment at the Centers for Disease Control and Prevention, which tests the contents of cigarettes.

Harkin's office cited figures that smoking is the leading cause of preventable deaths and causes $110 billion in heath costs every year.

Harkin believes prevention will go a long way to boosting the health of Americans while boosting health of the American economy.

The U.S. House on Wednesday evening passed the $819 billion economic stimulus package on a party-line vote, despite President Barack Obama's efforts to achieve bipartisan support for the bill, CNNMoney.com reports.

The final vote was 244 to 188. No Republicans voted for the bill, while 11 Democrats voted against it.

The Senate is likely to take up the bill next week.

All About Tom Harkin • Smoking