SPRINGFIELD, Illinois (CNN) -- It wasn't long after the Illinois state Senate voted unanimously to remove Democratic Gov. Rod Blagojevich from office that Lt. Gov. Patrick Quinn put his hand on a Bible and took the oath of office to replace him. 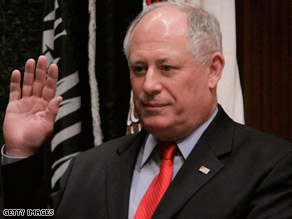 New Gov. Patrick Quinn says he hopes "to restore the faith of the people of Illinois."

Quinn, a 60-year-old tax attorney, has spent most of the last 27 years in public office. On Thursday, he took up his greatest challenge yet.

"In this moment our hearts are hurt," Quinn said after the swearing in. "It is very important that all of us understand that we have a duty, a mission, to restore the faith of the people of Illinois in the integrity of our government and to make sure that all of our elected officials have the confidence of the voters.

"I think this is our highest calling," he said. "I think that is what we have to do in the coming days."

Blagojevich was arrested in December on federal corruption charges. Federal authorities allege, among other things, that he was trying to sell or trade the Senate seat that became vacant after Barack Obama was elected president.

"When I woke up on the morning of December 9, it was quite a shock, I think for all of the people of Illinois," Quinn said, "And I think it is something that you have to accustom yourself to. But I'm an organizer. Early to bed, early to rise, organize, organize, organize and that's what we've got to do for Illinois for everyday people."

Quinn, a Democrat, was elected to the office of lieutenant governor in 2002 and was re-elected in 2006.

"His priorities include advocating for taxpayers and consumers, protecting the environment, promoting decent health care, and helping members of the armed services and their families," his official Web site said.

He served a term as Illinois state treasurer from 1991 to 1995, leaving office after an unsuccessful campaign for secretary of state in 1994.

Quinn waged another losing campaign in 1996 when Dick Durbin beat him in the Democratic primary for the U.S. Senate seat opened by the retirement of Sen. Paul Simon. Durbin went on to win the seat and is now Illinois' senior senator.

His political career began in Chicago in 1982, when Quinn, then a practicing tax attorney, was elected Commissioner of the Cook County Board of (Property) Tax Appeals.

Quinn, who is divorced, has two sons. He grew up in Hinsdale, Illinois, but now lives in Chicago.

Quinn called for Blagojevich to step down in the weeks after his arrest and supported the Illinois House of Representatives when it voted to impeach the embattled governor.

On Thursday, he said the state's elected representatives carried out their duties faithfully.

"I want to say to the people of Illinois, the ordeal is over," he said. "The citizens of Illinois can be extremely proud of our elected representatives in the House of Representatives and in the Senate, the senators who today carried out their responsibilities with serious purpose and due process.

"I think the people of the land of Lincoln are very, very proud of our elected representatives, who reflected the will of the people."