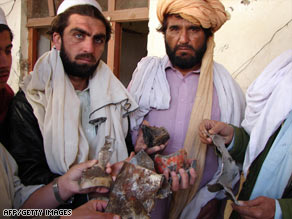 Tribesmen hold pieces of a missile after a suspected U.S. strike in northern Pakistan last week.

"There is no understanding between Pakistan and the United States on Predator attacks," the unnamed spokesman said in a release, referring to the drones used by the CIA and U.S. military.

Islamabad's statement came a day after U.S. Defense Secretary Robert Gates made a rare public admission that the United States does attack targets in Pakistan.

"Both President Bush and President Obama have made clear that we will go after al Qaeda wherever al Qaeda is. And we will continue to pursue this," Gates told the Senate Armed Services Committee in his first congressional testimony as Obama's Pentagon chief. Read Gates' prepared testimony (PDF)

Pakistan's response Thursday may have been aimed at reassuring the Pakistani public that Islamabad has not given Washington a free hand to carry out military operations within its borders.

But the Pakistanis also extended a hand to the Obama administration.

"We want closer cooperation at the operational level to deal with militancy," the Foreign Ministry said. "As far as al Qaeda is concerned, Pakistan has done more than any other country. We look forward to working closely with the new U.S. administration on all issues, including in the fight against terrorism."

Seventeen people were killed Friday in two missile strikes in the ungoverned tribal area of Pakistan. A government official and two military officials said they were U.S. attacks. They were the first such strikes since Obama took office January 20.

The tribal region of Pakistan has seen a sharp spike in the number of aerial attacks carried out by unmanned drones.

The United States has the only military with drones operating in the area.

In 2008, there were 30 suspected U.S. missile strikes in Pakistan, based on a count by CNN in Islamabad.

CNN's Zein Basravi in Islamabad contributed to this report.