(CNN) -- Congress has moved to prevent money from the proposed $825 billion stimulus package from being used for zoos, aquariums, golf courses, swimming pools and casinos, an effort to ensure the bill funds only what it calls the "highest quality" infrastructure projects. 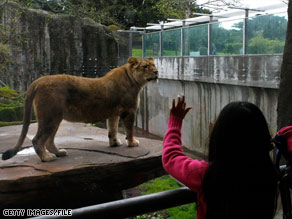 Restrictions added to the stimulus proposal would keep the money from zoo projects, among other things.

"The purpose of this bill is to direct funding at projects that are primarily and clearly aimed at benefiting the economic conditions of communities and the public at large," the bill states. "The federal government and all other levels of government are directed to look with a skeptical eye at projects that don't meet that test."

CNN revealed last month that a list of "ready to go" stimulus projects endorsed by the U.S. Conference of Mayors included museum and zoo renovations, aquatic centers, skateboard parks and bike and horse paths. One of the zoo projects in the report is a $4.8 million polar bear exhibit at the Providence, Rhode Island, zoo.

The House Appropriations Committee added those restrictions last week after criticism from watchdog groups like the National Taxpayers Union, which monitors government spending.

"To the people supporting them, these proposals aren't a joke," said Pete Sepp, the group's vice president. "But to the taxpayers funding them, yes this will be a joke for them, only they won't be laughing."

The restrictions in the bill appear meant to address reports about some of the projects endorsed by the U.S. mayors, Sepp said.

The stimulus bill, known as the American Recovery and Reinvestment Act, has been placed on the congressional fast-track. It could come to a vote in the full House of Representatives as soon as Wednesday, and Democratic leaders have said they aim to get the package to President Obama's desk for enactment by Presidents Day.

"A historical level of transparency, oversight and accountability will help guarantee taxpayer dollars are spent wisely and Americans can see results for their investment," Rep. Dave Obey, the Wisconsin Democrat who leads the Appropriations Committee, said in a statement.

The committee also added language that would prevent any money given to the state of Illinois from being handled by the state's impeached governor, Rod Blagojevich.

Blagojevich faces federal charges accusing him of attempting to trade or sell the U.S. Senate seat vacated by Obama after his November election, and the state Senate began his trial Monday. The governor denies any wrongdoing and has skipped his impeachment trial to proclaim his innocence on the talk-show circuit.

The measure sets up project monitoring, including a government-wide recovery program Web site, where all announcements for grant competitions, formula grant allocations and competitive grant awards must be listed. In addition, government agencies must publish on the site, "a description of all infrastructure projects, and the total cost and the justification for using stimulus money."

The strict rules require that the notification include "the name of a person to contact at the entity if there are concerns with the investment and an e-mail address for the federal official in each agency whom the public can contact," the bill states. "Also included within the notification must be a certification from the mayor or governor or other chief executive, as appropriate, that the investment has received the full review and vetting required by law and that they accept responsibility that this investment is an appropriate use of taxpayer dollars."

A Recovery Act Accountability and Transparency Board will be created "to review management of recovery dollars and provide early earning of problems," according to a summary of the bill provided by the appropriations committee. The board will include inspectors general and deputy cabinet secretaries.

The stimulus package is already being taken up by key committees in the Senate, where Majority Leader Harry Reid -- from casino-heavy Nevada -- said he is not concerned about the House restrictions on money going to casinos.

"Casinos are a huge part of Nevada's economy and create a lot of jobs," Reid told CNN on Tuesday. "But none of the spending in this bill is earmarked for any casino, so this provision is largely symbolic."