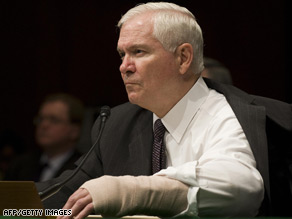 Robert Gates testifies Tuesday before a Senate panel. He was wearing bandages from surgery he had on his arm.

Gates spoke to the Senate Armed Services Committee in his first comments to Congress as President Obama's defense secretary.

In response to a question from committee Chairman Carl Levin, D-Michigan, Gates said the strikes will continue to target terrorists who have based themselves across the border from Afghanistan.

"Let me just say, both President Bush and President Obama have made clear that we will go after al Qaeda wherever al Qaeda is. And we will continue to pursue this," Gates said.

Asked by Levin whether Pakistan is aware of this continued pursuit, Gates replied simply, "Yes, sir."

Seventeen people were killed Friday in two missile strikes in the ungoverned tribal area of Pakistan. A government official and two military officials said they were U.S. attacks. They were the first such strikes since Obama took office Tuesday.

The tribal region of Pakistan has seen a sharp spike in the number of aerial attacks carried out by unmanned drones.

The United States has the only military with drones operating in the area.

In 2008, there were 30 suspected U.S. missile strikes in Pakistan, based on a count by CNN in Islamabad.

Gates opened his comments with a clear message that Afghanistan is at the top of his to-do list.

In one of the clearest indications of the military planning for adding troops, Gates outlined a deployment of two brigades by spring and the third by late summer. Read Gates' prepared testimony (PDF)

Additional troops, even if available to deploy, could not be added until later this year because it would take that much time to build out the required infrastructure in Afghanistan to support the troops, Gates explained.

Sen. John McCain, R-Arizona, who was instrumental in pushing for a troop surge in Iraq, warned that a troop increase in Afghanistan may not achieve the same results.

Gates himself noted that increased military presence must be accompanied by non-military solutions if progress is to be made in the war.

When Gates arrived for his testimony Tuesday, he wore bandages on his left arm and had his suit jacket draped over his left shoulder. He had surgery Friday after tearing his biceps tendon while trying to attach a snow plow blade to his tractor.

Regarding withdrawal from Iraq, Gates said the military is planning various options, with the quickest withdrawal being the 16-month period -- ending in May 2010 -- outlined by Obama when he was running for president.

"We are working on a range of options for the president," he said. Among them is "essentially a completion of the work of the brigade combat teams and a transition to an assist-and-advisory role beginning at 16 months and proceeding further forward."

Under a recently approved agreement with Iraq, the United States is required to have all troops out by the end of 2011. Even after that, however, Gates indicated that a continued role of some kind is likely.

"As our military presence decreases over time, we should still expect to be involved in Iraq on some level for many years to come, assuming a sovereign Iraq continues to seek our partnership," he said. "The stability of Iraq remains critical to the future of the Middle East, a region that multiple presidents of both political parties have considered vital to the national security of the United States."

Gates also acknowledged that some decisions he had decided to put off when he was Bush's defense secretary are now back on his plate, especially the budget.

"As I focused on the wars these past two years, I ended up punting a number of procurement decisions that I believed would be more appropriately handled by my successor and a new administration. Well, as luck would have it, I am now the receiver of those punts, and in this game there are no fair catches," Gates noted.

"While this will undoubtedly be a long and difficult fight, we can attain what I believe should be among our strategic objectives: an Afghan people who do not provide a safe haven for al Qaeda, reject the rule of the Taliban, and support the legitimate government that they elected and in which they have a stake," Gates said.