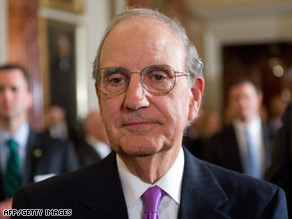 Former Sen. George Mitchell says that "there is no such thing as a conflict that can't be ended."

The schedule is still being planned, but initial stops include Jerusalem; Ramallah, West Bank; Cairo, Egypt; Amman, Jordan; and possibly Saudi Arabia as well as Europe.

President Barack Obama on Thursday named Mitchell as his special envoy to the region.

Obama said Mitchell will help implement a cease-fire between Israelis and Hamas and support anti-smuggling efforts to prevent the latter from rearming.

But he added, "Lasting peace requires more than a long cease-fire, and that's why I will sustain an active commitment to seek two states living side by side in peace and security."

After he was officially named an envoy at a State Department ceremony Thursday, Mitchell said, "I don't underestimate the difficulty of this assignment."

Mitchell said that he believed Jewish and Palestinian states could live side by side and the conflict, even if centuries old, could end -- a lesson he learned during his negotiations in Northern Ireland as a peace broker for former President Clinton.

The challenges of working in the volatile region would not be new to the 75-year-old former Democratic senator from Maine. In 2000, Mitchell served on a commission that examined the escalating violence between Israelis and Palestinians.

In 2001, he wrote a report that called for a halt to Israeli settlements and greater Palestinian efforts to crack down on terror. The Mitchell Report was praised for its impartiality and became the basis of a so-called road map for later peace initiatives.

By naming Mitchell as his personal envoy, Obama is sending a diplomatic heavyweight to the region.

In recent days, Obama officials talked to Israeli, Palestinian and Arab diplomats about the choice, sources close to the administration and diplomats said.

Obama and Secretary of State Hillary Clinton also named Richard Holbrooke, former U.S. ambassador to the United Nations, as a special representative to Afghanistan and Pakistan. Holbrooke negotiated the 1995 agreement at Dayton, Ohio, that ended the war in Bosnia.

Mitchell and Holbrooke are two of several envoys who will work in the new administration. Sources said Dennis Ross, a former Mideast peace envoy for previous administrations, will be an envoy in charge of engaging Iran, but it's unclear what role he'll play in light of Mitchell's appointment.