WASHINGTON (CNN) -- A Saudi national released from U.S. detention at Guantanamo Bay, Cuba, in September 2007 is believed to be a key leader in al Qaeda's operations in Yemen, according to a U.S. counterterrorism official. 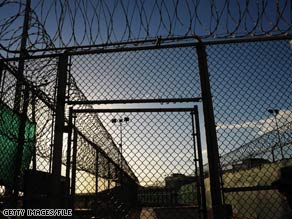 Ali al-Shiri was released in 2007 from the U.S. detention facility at Guantanamo Bay, Cuba.

The Defense Department recently estimated that more than 60 terrorists released from Guantanamo may have returned to the battlefield.

According to the counterterrorism official, Ali al-Shiri traveled to Yemen after being released to Saudi Arabia and may have been involved in recent al Qaeda attacks in Yemen, including a car bombing outside the U.S. Embassy in Sanaa last year that killed nearly a dozen people.

His title is deputy and senior operations commander, the source said.

According to the magazine Sada al-Malahem, or the Echo of the Epics, published by al Qaeda in Yemen, al-Shiri attended a media session in which Yemen commander Abu Baseer was interviewed.

The magazine identified al-Shiri as Baseer's deputy commander and quoted Baseer as announcing that al Qaeda's operations in Yemen and Saudi Arabia have been combined to become al Qaeda on the Arabian Peninsula.

The magazine noted that al-Shiri was released from Guantanamo more than 10 months ago.

He fled a Saudi jihadi re-education program, where he went after his release, a Saudi source told CNN's Nic Robertson.

President Obama on Thursday signed an order mandating that the Guantanamo Bay prison be closed within the year. What to do with the detainees has been a hotly debated topic.

The issue of freed detainees engaging in terrorism is one concern. Another is housing them in prisons inside the United States.

McCain, in a joint statement with South Carolina GOP Sen. Lindsey Graham, said he supported Obama's decision to "begin a process that will, we hope, lead to the resolution of all cases of Guantanamo detainees."

But Thursday night on CNN's "Larry King Live," McCain said the new president may have been hasty in the decision and should have taken the time to consider everything associated with closing the camp before forcing himself into a timetable.

All About Guantanamo Bay • Yemen