WASHINGTON (CNN) -- Former Senate Majority Leader George Mitchell was named special envoy for the Middle East during an event at the State Department on Thursday afternoon. 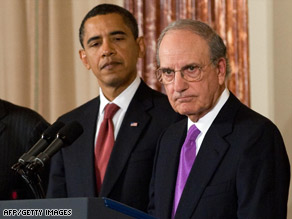 The move could signal that Obama plans to get involved in the Mideast peace process early in his term. It was announced just before 3 p.m. at an event with President Obama and Secretary of State Hillary Clinton.

Holbrooke, who worked as a diplomat, journalist and investment banker, became one of the most influential diplomats in U.S. history when he worked in the mid-90s to end the brutal fighting in the Balkans.

He was the main architect of the Dayton Accords that ended the fighting in Bosnia and Herzegovina.

After he was officially named Obama's envoy, Mitchell said, "I don't underestimate the difficulty of this assignment."

Mitchell said that along with Obama and Clinton, he believed a goal of a Jewish state and a Palestinian state living side by side was possible and the conflict, even if centuries old, could end -- a lesson, he said, he learned during his negotiations in Northern Ireland.

In recent days, Obama officials talked to Israeli, Palestinian and Arab diplomats about the choice, sources close to the administration and diplomats told CNN.

After Mitchell was introduced Thursday, Obama said, "Time and again, in public service and private life, he has acted with skill and acted with integrity. He will be fully empowered at the negotiating table, and he will sustain our focus on the goal of peace. "

Mitchell served as a Mideast envoy for the Bush administration, writing a 2001 report that called for a halt to Israeli settlements and greater Palestinian efforts to crack down on terror.

He also was a peace broker on Northern Ireland for President Clinton.

Sallai Meridor, Israel's ambassador to the United States, released a statement Thursday saying, "Israel holds Sen. Mitchell in high regard and looks forward to working with him on taking the next steps towards realizing a future of peace and security for Israel and her neighbors."

Meridor also said Holbrooke was a "longstanding friend of Israel and we wish him every success."

Mitchell and Holbrooke are two of several envoys who will work in the new administration. Sources say Dennis Ross, a former Mideast peace envoy for several previous administrations, will be an envoy in charge of engaging Iran, but it's unclear what role he'll play in light of Mitchell's appointment.

CNN's Ed Henry and Elise Labott contributed to this report.

All About George Mitchell • Barack Obama