WASHINGTON (CNN) -- President Barack Obama weighed in Thursday on the conflict between Israel and Hamas, urging Israel to open Gaza border crossings and telling the Islamic fundamentalist organization to stop rocket fire into the Jewish state. 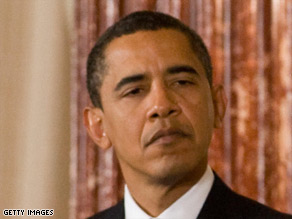 President Obama called on both Israel and Hamas to make changes toward Mideast peace.

He urged Israel to allow the flow of aid and commerce into the Palestinian territory.

"Our hearts go out to Palestinian civilians who are in need of immediate food, clean water and basic medical care," he said.

The crossings should be opened with an "appropriate monitoring," he added.

Obama said Hamas leaders, for their part, must put an end to rocket attacks.

He said he will send former Sen. George Mitchell, who was appointed Thursday as special envoy for Middle East peace, to the region as soon as possible.

Earlier, Secretary of State Hillary Clinton arrived at her new office in the State Department, promising a renewed emphasis on candor and "robust diplomacy" as the primary means for advancing American interests around the world.

America's new chief diplomat walked through the front doors of the State Department lobby shortly after 9 a.m. ET to thunderous applause from an overflow crowd of about 1,000 career diplomats and other department employees.

"I believe with all of my heart that this is a new era for America," Clinton told her colleagues. "President Obama set the tone with his inaugural address. ... Robust diplomacy and effective development are the best long-term tools for securing America's future."

In remarks that could be interpreted as a rebuke of the departed Bush administration, Clinton also said that the Obama administration would not "tolerate the divisiveness and paralysis that has undermined our ability to get things done for America."

Clinton also called for a new sense of candor and free exchange of ideas. She urged the country's diplomatic corps to think "outside the proverbial box."

"There's nothing I welcome more than a good debate and the kind of dialogue that will make us better," she said.

Clinton later attended an intelligence briefing and a meeting with members of the Diplomatic Security Service. She also walked through various State Department offices, including the operations center.

Clinton will also visit the U.S. Agency for International Development, which she praised "for the work they've done on behalf of development through some very difficult years."

During her confirmation hearing, Clinton pledged to secure more resources for the State Department and USAID, which has seen a lot of its development work fall to the Pentagon during the Bush administration.

Clinton is the 67th U.S. secretary of state.

All About Hillary Clinton • U.S. Department of State • Barack Obama