Cheney: Bush should have pardoned Libby 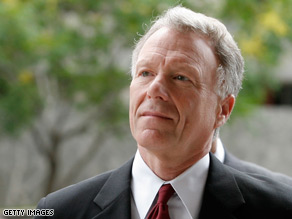 Lewis "Scooter" Libby was convicted of lying to a grand jury and investigators in 2007.

"He was the victim of a serious miscarriage of justice, and I strongly believe that he deserved a presidential pardon. Obviously, I disagree with President Bush's decision," Cheney told Stephen F. Hayes of the Weekly Standard, a leading conservative Washington magazine.

Libby, Cheney's former chief of staff, was convicted of obstructing a federal investigation into the revelation that Valerie Plame Wilson was a CIA agent.

He was sentenced to 30 months in prison and fined $250,000. Bush commuted the sentence, which he called "excessive." But he did not pardon Libby, much to the aggravation of many influential conservatives.

Unlike a presidential pardon, which wipes a person's crimes off the books, Bush's commutation of Libby's sentence only means that he does not have to serve the prison sentence. He is still considered guilty of the crime of which he was convicted.

Hayes said that Cheney had publicly disagreed with Bush only four times in the eight years of the Bush administration. They were out of office for only a day before this disagreement surfaced.

No one was ever charged with leaking Plame Wilson's identity. She and her husband, former diplomat Joseph Wilson III, said the revelation was a retaliation for Wilson claiming a key justification for the invasion of Iraq was false.

All About Dick Cheney • Lewis Libby