WASHINGTON (CNN) -- The Obama administration has asked former U.S. Senator George Mitchell to be a special envoy to the Middle East, sources close to the administration and diplomats said. 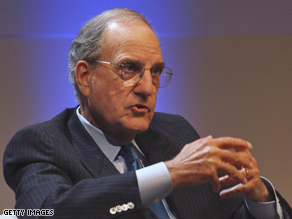 George Mitchell has previously served as a U.S. envoy to the Middle East and Northern Ireland.

In the final days of the transition, Obama administration officials talked to Israeli, Palestinian and Arab diplomats about the choice, the sources said.

Mitchell served as a Mideast envoy for the Bush administration, authoring a 2001 report that called for a halt to Israeli settlements and greater Palestinian efforts to crack down on terror.

He also was a peace broker on Northern Ireland for U.S. President Bill Clinton.

If named to the post, Mitchell would be one of several envoys who would work in the new administration.

Sources say that Dennis Ross, a former Mideast peace envoy for several previous administrations, will be an envoy in charge of engaging Iran on a wide range of issues, including its nuclear program and its support for terror groups such as Hamas and Hezbollah.

Watch the challenges Obama faces in the Middle East »

Former U.N. Ambassador Richard Holbrooke, who negotiated peace in the Balkans, is expected to become an envoy dealing with Afghanistan, Pakistan and India.