(CNN) -- Jenna and Barbara Bush know a lot about growing up in the White House. 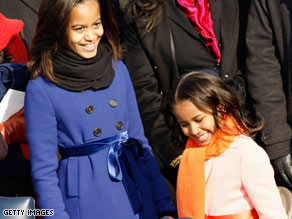 The Bush twins told Sasha and Malia Obama to "remember who your dad really is."

Like their dad, who left a note for President Barack Obama, Jenna and Barbara Bush wrote Tuesday to Obama's daughters about what to expect in the weeks and months ahead.

"We also first saw the White House through the innocent, optimistic eyes of children," the twins wrote in an open letter published in Tuesday's Wall Street Journal.

Growing up in the White House »

The twins reminisce in the letter about important events and historic moments they were able to be part of in a presidential family.

But the Bushes also tried to prepare Sasha and Malia for some sobering truths.

"Although it's an honor and full of so many extraordinary opportunities, it isn't always easy being a member of the club you are about to join," they said. "Our dad, like yours, is a man of great integrity and love; a man who always put us first. We still see him now as we did when we were 7: as our loving daddy."

But as their father was increasingly criticized in the media and mocked by late night comedians, the twins said they learned a lesson.

"He is our father, not the sketch in a paper or part of a skit on TV," they wrote. "Many people will think they know him, but they have no idea how he felt the day you were born, the pride he felt on your first day of school, or how much you both love being his daughters. So here is our most important piece of advice: Remember who your dad really is."

It helps, wrote the Bushes, to surround yourself with loyal friends.

The rest of the letter was more lighthearted, with the twins sharing some of their favorite memories of living in the White House, including playing house and hide-and-seek in what many children would consider to be the ultimate playground.

"When we played house, we sat behind the East Sitting Room's massive curtains as the light poured in illuminating her yellow walls," the girls said. "Our 7-year-old imaginations soared as we played in the enormous, beautiful rooms; our dreams, our games, as romantic as her surroundings. At night, the house sang us quiet songs through the chimneys as we fell asleep."

They also told the Obama girls to embrace any opportunity they had: "When your dad throws out the first pitch for the Yankees, go to the game."

"In fact, go to anything and everything you possibly can: the Kennedy Center for theater, state dinners, Christmas parties (the White House staff party is our favorite!), museum openings, arrival ceremonies, and walks around the monuments."

The twins also reminded Sasha and Malia to be themselves -- kids -- saying even if they travel over holidays like Halloween, the girls should dress up and trick-or-treat down a plane aisle.

"Slide down the banister of the solarium, go to T-ball games, have swimming parties, and play Sardines on the White House lawn," the Bush girls said. "Have fun and enjoy your childhood in such a magical place to live and play."

Jenna and Barbara Bush told the girls to cherish the pet that their father so publicly promised them.

"Sometimes you'll need the quiet comfort that only animals can provide," they said.

"Four years goes by so fast," they wrote. "So absorb it all, enjoy it all!"