CHEYENNE, Wyoming (CNN) -- While Washington gears up for Inauguration Day, Republicans in Wyoming are taking stock of their future and assessing Barack Obama. 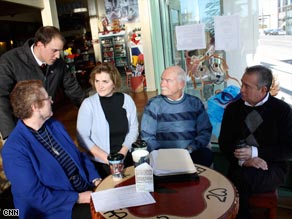 "I'm afraid that so much of the responsibility of individuals is being transferred to Washington," says Jack Mueller, a 67-year-old retired state government worker. "Big Brother is going to be telling us what to do over and over and over again."

Mueller and a handful of other Republicans sit in the coffee shop of the historic Plains Hotel on this windy January morning, chatting about the incoming administration and their mixed feelings.

These are back-to-basic Republicans. They want small government, strong national defense and an emphasis on individual liberties and accountability.

"I wish President[-elect] Obama well, but I do not wish him success in the things he is proposing," says Ted Mueller, 57, an insurance salesman.

Ted is not related to Jack, but they share concerns about what they see as a federal government on the brink of a huge expansion.

Janet Anderson, 57, returned to Cheyenne after a career in the oil business in Texas. She worries about the federal government bailing out businesses.

"The Obama administration is taking consequences out of our nation."

She says, "If you go make a bad business decision and you lose your shirt, you just go to the government and get some money."

"He's only 20 years old -- and the decisions being made right now, the deficit and how were approaching solving problems -- are going to impact his generation significantly." she says.

Only 33 percent of Wyoming's voters cast their ballots for Obama, but they are concerned about the future of the Republican Party outside the state.

"We really need to decide to define our party and what we're going to be in the future," says 26-year-old Dicky Shanor, a Cheyenne attorney. "We need somebody on the federal level to step up and define us. I don't know who that's going to be."

"It'd be great if we could have another leader like Ronald Reagan -- that strength of leadership, the strength of character," says Ted Mueller, "I don't see it right now, but there's always hope. Somebody will rise up."

These Wyoming Republicans share a respect for the office of the president, even if they have doubts about the man.

"As an American, obviously I want him to succeed. He is my president," says Jack Mueller. "I hope that he will do well."

"I truly hope that he succeeds. You have to respect the office, I don't care who's in it," says Janet Anderson. "If Barack Obama earns my respect, I will respect the man."