(CNN) -- Wireless service was spotty in downtown Washington on Tuesday as hundreds of thousands of people tried to share Barack Obama's historic inauguration through cell-phone calls and text messages to family and friends. 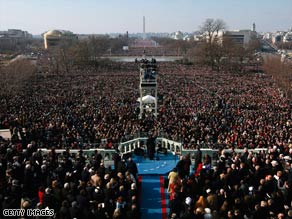 President Obama delivers his inaugural speech Tuesday before more than a million people.

"I didn't have a lot of service for some of the [inauguration] program. It was really intermittent," said Barbara Talisman of Chicago, Illinois, who watched the ceremony from the National Mall near the Smithsonian's Museum of Natural History.

"It just started working again," added Talisman, whose provider is AT&T, shortly after the ceremony ended.

Shonney Livingston of Germantown, Maryland, had trouble placing calls from her cell phone earlier Tuesday from Lafayette Square, near the White House. Her service provider is Verizon Wireless, said Livingston, who was able to make calls again after President Obama finished his speech.

Regina May, a pastor from Decatur, Alabama, was unsuccessfully trying to place calls to a companion Tuesday afternoon outside St. John's Episcopal Church, where Obama attended services Tuesday morning.

"I haven't been able to get through to someone that's here," May said, resting on a bench after listening to Obama's speech. May had no backup plan and wasn't sure how she and her companion would connect. "I've been trying to get in contact with them," she said.

"Even in the most crowded areas, those closest to the Capitol ... we saw the majority of calls going through on the first try," Verizon Wireless spokesman John Johnson said Tuesday afternoon. Johnson said he himself received a picture text from someone in a reserved seating area near the Capitol.

"The network continues to perform well," AT&T spokesman Mark Siegel said. "We are seeing some congestion, which is no surprise given the huge size of the crowds."

Up to 2 million people were expected to pack downtown Washington for the inaugural festivities.

"We've done virtually everything that can be done to add capacity to our existing network," Johnson added. "But even the best network is like a highway system. We've added thousands of lanes, but millions of cars can still cause a traffic jam."

AT&T Wireless has boosted its wireless network capacity by more than 69 percent along the parade route, Siegel said.

Carriers also have expanded what they call their backhaul systems, which carry wireless traffic from cell phone towers to the land-line network through which those calls are actually routed.

Reports surfaced this week that the U.S. Secret Service might disable or limit cell phone service on Inauguration Day to preserve bandwidth for emergency government users. But a Secret Service spokesman told The Washington Post that the agency has neither the capacity nor the plans to do so.

Text, don't talk. Text messages and e-mails can get through wireless networks when it is too congested to make voice calls.

Snap and save, send later. Sending cell phone photos and video require large amounts of bandwidth on mobile networks. Feel free to snap photos with your cell phone, but wait until leaving the inaugural events to send them to friends and family.

Have a back-up plan. Establish a rendezvous place and time to connect with your party, or try moving to an area where there is less congestion.