(CNN) -- Members of the international community have welcomed Barack Obama becoming the 44th President of the United States -- and the first African-American to take leadership of his country. 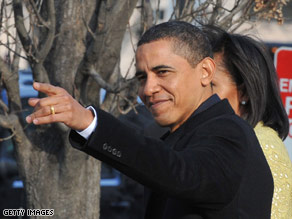 Barack and Michelle Obama pictured before the inauguration Tuesday in Washington.

"I am confident that Japan and the United States, which are in the position of leading the world, can create a better future, by putting together our expertise, will, passion and strategy. With this conviction, I intend to work hand in hand with President Obama, to further strengthen the Japan-U.S. alliance, and make efforts towards the peace and prosperity of the Asia-Pacific region and the world."

French President Nicolas Sarkozy said in a statement: "With your election, the American people has vigorously expressed its confidence in progress and in the future, as well as its resolve to have an open, new, strong and caring America that you embody.

"As you are entering office, I should like to convey to you, on my behalf and on the behalf of the people of France, my very best wishes for great success at the head of the American nation."

UK Prime Minister Gordon Brown, speaking from Downing Street, said the new president was a "man of great vision and moral purpose" in comments reported by the UK Press Association.

"The whole world is watching the inauguration of President Obama, witnessing a new chapter in both American history and the world's history. He's not only the first black American president but he sets out with the determination to solve the world's problems." Watch world reaction to Obama's inauguration

In a statement Israeli Prime Minister Ehud Olmert said: "The greatest democracy in the world has again proven that it is a beacon and example for many countries. The entire State of Israel rejoices with the United States and welcomes President Obama, who took the oath of office this evening.

"Barack Obama's journey to the White House has impressed and inspired the entire world. I am convinced that the United States' deep and abiding ties with Israel will strengthen further. The values of democracy, brotherhood and freedom that constitute the building blocks of American society are also shared by Israeli society, together with the faith in man's power and ability to change and influence his surroundings.

"We wish the incoming President success in his office and are certain that we will be full partners in advancing peace and stability in the Middle East."

In a speech to mark Australia Day, Australian Prime Minister Kevin Rudd said: "I believe from everything I have seen, read and heard and from the conversations that I have had with him that the American people have chosen well in their new president."

Calling Barack Obama " the hope of our time," Rudd added that "Australia as always stands ready to work with America in the great challenges that lie ahead."

Mwai Kibaki, president of Kenya, birthplace of Obama's father, said: "On behalf of the government and the people of Kenya and on my own behalf, I extend our message of best wishes on the auspicious occasion of your inauguration as the 44th president of the United States of America.

"On this special day we recall the remarkable journey you have traveled to become the leader of your great country. Through that journey you have inspired many young and old people, not only in America but around the world with a strong message of hope. ...

"We, the people of Kenya, cherish the many years of bilateral ties with the U.S.A. and look forward to even stronger relations in areas that are mutually beneficial to our two countries."

Philippines President Gloria Macapagal-Arroyo said: "In my conversations with Senator Barack Obama before the elections and President-elect Obama after his election, it was made clear that the special relationship between the U.S. and the Philippines will continue unabated. Our ties run deep. Over two and a half million Americans are of Filipino descent."

Mexican President Felipe Calderon said: "I want to wish him, sincerely, ... great success in the work as the new President of the United States, Barack Obama." Calderon committed to work together on problems shared by the United States and Mexico and said that work Obama does to improve the U.S. economy will also be a boon to Mexico.

South Africa's former president, Nelson Mandela, said in a letter to Obama posted on the Nelson Mandela Foundation Web site: "Your election to this high office has inspired people as few other events in recent times have done. Amidst all of the human progress made over the last century the world in which we live remains one of great divisions, conflict, inequality, poverty and injustice.

"Amongst many around the world a sense of hopelessness had set in as so many problems remain unresolved and seemingly incapable of being resolved. You, Mister President, have brought a new voice of hope that these problems can be addressed and that we can in fact change the world and make of it a better place."