Bush's last day: Calls, candy and a flight to Midland 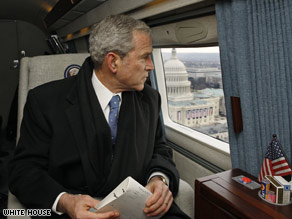 "Today is a good day for the Bush family. We're back in Texas, and we're here to stay," Bush told a cheering crowd in downtown Midland's Centennial Plaza. "I am grateful that y'all came out to welcome us home."

The Bushes flew to Midland from Washington on Tuesday after inaugural ceremonies for President Obama.

"A good man took the oath of office today, and we offer him our prayers for success," he said.

The Bushes boarded a helicopter in front of the Capitol bound for Andrews Air Force Base shortly before 1 p.m.

Obama and first lady Michelle Obama walked the Bushes to the helicopter -- known as Marine One when the president is on board but called "Executive One" for this flight -- and bid them farewell with handshakes and hugs.

The former president kept busy right up until his final moments in the White House.

The former president also had a conversation with his good friend the Rev. T.D. Jakes.

Jakes is the chief pastor of the nondenominational megachurch Potter's House in Dallas, Texas. He was in Washington to give a sermon Tuesday at St. John's Church, a short walk from the White House.

It's unclear what was said in any of these exchanges, but Bush made clear to the nation last week that his presidency was challenging and that he is "filled with gratitude."

Though there has been "legitimate debate" about many of his decisions, including the war in Iraq, Bush said, "there can be little debate about the results. America has gone more than seven years without another terrorist attack on our soil."

Noting that Bush's last day in the home he has known for eight years was fraught with emotion, press secretary Dana Perino spoke affectionately about her boss.

Bush "gave me a kiss on the forehead," she said. "It's something I will never forget."

An attempt to sweeten the memories of the White House press corps was made Tuesday when Perino gave reporters boxes of M&Ms. The candies were wrapped with a presidential seal and signed by President Bush.

After the inauguration, a wheelchair-bound Vice President Dick Cheney, who injured his back lifting boxes while moving, was taken to a motorcade.