WASHINGTON (CNN) -- President-elect Barack Obama's inaugural address is one of the most anticipated speeches in decades, with many expecting his words to be chiseled into marble some day. 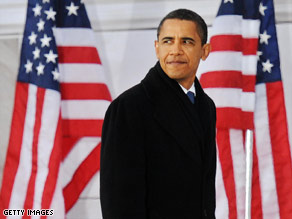 Many expect Barack Obama's inauguration speech to compare to those given by Roosevelt and Kennedy.

Obama aides said that the speech will last 18 to 20 minutes and that Obama will emphasize that America is entering a new area of responsibility.

He will say that America has been hurt by a "me first" mentality that has contributed to the current economic crisis, aides say, and call on individuals -- as well as corporations and businesses -- to take responsibility for their actions.

Obama has said he has been studying previous inaugural addresses -- including President Abraham Lincoln's and the speeches President Franklin D. Roosevelt gave as he took office amid the Great Depression.

Given the nation's current economic crisis, Errol Lewis, a columnist for the New York Daily News, was looking for Obama to echo Roosevelt's famous 1933 inauguration address when he said, "The only thing we have to fear is fear itself."

"He's got to calm the nation. I think he's got to reassure the nation and let people know that we are in it for the long haul. If you look at that 1933 speech, that is pretty much what FDR did," Lewis said.

Watch a preview of inauguration events »

"He wants to lift us up ... and all the aspirations we have, all the hope," Lewis said. "But at the same time, he has some very practical problems that start at 12:01 p.m., and he starts to own them at high noon. There are no easy answers."

Obama must also emphasize that his administration represents a fresh start for America and "kick away from that old history," said Peggy Noonan, President Ronald Reagan's speechwriter and a columnist for The Wall Street Journal.

"It's been about a year since people thought they had a president, if you will. ... It's been some time since the American people heard, 'We've got an economic problem, but, baby, we are getting through it. We are going to get past this thing. We are going to rise again,' " Noonan said.

Watch Noonan and others on the art of speech writing »

Obama has already demonstrated his ability as a master orator, and many observers are looking for the new president's address to equal the great speeches by presidents Roosevelt, John F. Kennedy and Reagan.

"He's got to give that great, soaring speech." CNN contributor David Gergen said. "I think the pressure is really on because of the historic nature of this presidency and also because of the extraordinary moment in which we find ourselves with this terrible recession."

Watch what is expected from Obama's speech »

"That is a lot to do in a single speech but, you know, because he has such a high reputation for giving excellent speeches ... the expectations for this one are just -- well, they're soaring," Gergen added.

But beyond the nation's immediate economic concerns, Obama's inauguration speech with also mark a national milestone: the inauguration of the first African-American president.

In his previous speeches, Obama has referred to another great African-American orator: the Rev. Martin Luther King Jr., who made a historic speech on the other end of the Mall. Obama is likely to refer to King and the dramatic struggles African-Americans have fought as they emerged from slavery and fought for full civil rights.

"If you think about the journey that this country has made, then it can't help but stir your heart," Obama told CNN's John King during an interview Friday. "The notion that I now will be standing there and sworn in as the 44th president, I think, is something that, hopefully, our children take for granted, but our grandparents, I think, are still stunned by, and it's a remarkable moment."

The pressure on Obama to produce a speech for the ages not is limited to the public, Obama said.

After a family visit to the Lincoln Memorial, which has Lincoln's second inaugural address inscribed on its walls, Obama's 10-year-old daughter, Malia, turned her father and said, "First African-American president -- better be good."