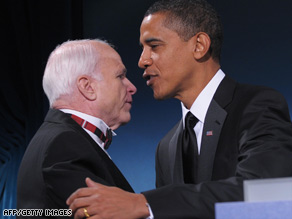 President-elect Barack Obama greets Sen. John McCain on stage after praising him at a bipartisan dinner.

"I could stand here and recite the long list of John's bipartisan accomplishments ..." Obama said.

"Campaign finance reform. Immigration. The Patients' Bill of Rights. All those times he has crossed the aisle and risked the ire of his party for the good of his country. And yet, what makes John such a rare and courageous public servant is not the accomplishments themselves, but the true motivation behind them."

McCain returned the gracious feelings at the dinner.

"I am very grateful to the president-elect and to all of you for this very considerate gesture, and for allowing me to play a small role in the inauguration of the 44th president of the United States, even if it isn't the one I had in mind a few months ago," McCain said.

"Tomorrow, the President-elect will accept the burdensome privilege of leading America to its next accomplishments and its future greatness," McCain went on to say. "He has my sincere best wishes for his success, and my promise of assistance. For his success will be our success."

After praising McCain, Obama urged everyone to take the bipartisan dinner past "just an inaugural tradition" and turn it into a "new way of doing the people's business in this city."

"We will not always agree on everything in the months to come, and we will have our share of arguments and debates," Obama said. "But let us strive always to find that common ground, and to defend together those common ideals, for it is the only way we can meet the very big and very serious challenges that we face right now."

On the eve of his inauguration, the president-elect even made time for a joke.

"I'm here tonight to say a few words about an American hero I have come to know very well and admire very much -- Sen. John McCain," Obama said as he opened his speech. "And then, according to the rules agreed to by both parties, John will have approximately 30 seconds to make a rebuttal."

Obama's speech at the bipartisan dinner capped a day filled by appearances, including visiting wounded soldiers and exhorting Americans to spend more time in the service of others.

In Washington people took in the sights of pre-inauguration activities and concerts.

"The energy on the streets is something I've never seen before," said Nancy Wigal, who lives in Vernon Square. "People are walking lighter, standing taller and are reaching out to one another. It feels like hope. It feels like shared happiness."

Wigal said Obama's inauguration has given residents hope that change actually will happen.

"It's all because of Obama -- we dare to feel positive that we may have actually elected a leader, not just a politician," she said. "There are impromptu progressive dinner parties, cookouts and house parties. We finally feel like a real change has come to town."

Obama began his day with a surprise visit to wounded soldiers at Walter Reed Army Medical Center. He met with 14 patients injured in either Iraq or Afghanistan.

Obama visited a National Day of Service project, stopping by the Sasha Bruce House, an emergency shelter for homeless teenagers in the Washington area.

Watch Obama speak about service on the eve of his inauguration »

The shelter provides a variety of services, including counseling, job training, and substance abuse prevention assistance, for up to 15 teenagers at a time.

Roughly 30 teenagers are spending the Rev. Martin Luther King Jr. holiday volunteering at the shelter by helping to renovate a dorm room.

Obama rolled up his sleeves and pitched in during the visit, using a roller to help paint a couple of walls and a piece of furniture.

"Don't underestimate the power of people who join together to accomplish amazing things," Obama added. Given the crisis America is currently in, "we can't allow any idle hands. Everybody's got to pitch in."

Wigal said Obama's actions and words make her believe the president-elect has the skills needed to help the country move forward.

"Those of us who live and work here, who try to create, shape, influence and move policy forward, are feeling as if we can finally do something that'll result in forward motion," Wigal said. "We believe we have a leader who listens to those who work the issues every day and know the real solutions."

For Wigal, that's exactly what makes Inauguration Day so important.

"Tomorrow is going to be the biggest day in our country's history since its creation," she said.

During Monday's activities Obama also cited the heroics of U.S. Airways pilot Chesley Sullenberger, who safely landed a crippled commercial airliner in the Hudson River last Thursday, saving the lives of all 155 people on board.

"If everybody did their job as well as he did [his] job, we would be in pretty good shape," Obama said.

Obama has personally invited Sullenberger to the inauguration.

Obama later joined Vice President-elect Joe Biden at a high school where students were making blankets and greeting cards, among other things, for soldiers overseas.

Speaking to the students, Obama again invoked King's memory, noting the slain civil rights leader had "dedicated his life to working at the grassroots level ... on behalf of justice and equality."

"I am making a commitment to you, as your next president, that we are going to make government work," Obama said. But, he warned, "government can only do so much. If we're just waiting around for someone else to do it for us ... it never gets done. We're going to have to take responsibility, all of us."

Incoming first lady Michelle Obama, joined by Jill Biden, the wife of the vice president-elect, spent the morning at a separate volunteer service event at RFK Stadium, where people were assembling care packages for soldiers serving in Iraq and Afghanistan.