WASHINGTON (CNN) -- President-elect Barack Obama will convene a meeting of his top economic advisers on Wednesday, his first full day in office, as the incoming president immediately tries to put the financial crisis at the center of his agenda, senior aides said. 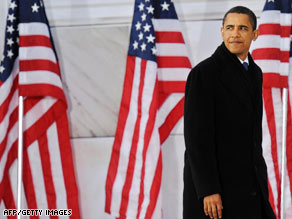 Three aides said Obama is planning an ambitious first week that will include several other high-profile moves: a Wednesday meeting with military brass to map out a change to the mission in Iraq, appointment of at least one envoy to deal quickly with the Mideast crisis and issuance of executive orders on issues ranging from the environment to the detainment of terror suspects.

As soon as Obama is sworn in Tuesday, vans will take senior staff from the Capitol to the White House to begin working, two Obama transition officials said.

Twenty senior staff have had their paperwork cleared to enter the White House on Tuesday. Some senior staff will stay behind to attend the traditional lunch with the new president, but then they'll get to work, even as the inaugural parade snakes around the city, the officials said.

The bulk of the executive orders are not likely to be issued Tuesday because the incoming administration, in the words of one top aide, "does not want to cloud the first day" by overshadowing the historic swearing-in of Obama as the first African-American president.

Aides instead are pointing to Wednesday as a key marker. Obama is planning to bring together his top economic advisers to map out how to step up his personal lobbying efforts to get Congress to pass his stimulus plan, which has a price tag of $825 billion.

"We have got to get an economic recovery and reinvestment plan in place quickly to turn the economy around," said one senior aide, citing the financial crisis as the top priority.

And on Wednesday, Obama also will meet with top military commanders to discuss the war in Iraq and move to begin implementing his campaign promise of removing all combat troops within 16 months, according to aides. The move is part of an effort to reassure Obama's liberal supporters that despite his heavy focus on the financial crisis, he will stay focused on changing the mission in Iraq, the stance that first propelled his presidential campaign at the grass-roots level.

The Obama aides also revealed the Mideast crisis has shot to the top of the immediate agenda. The aides said Obama has been pushing behind the scenes for quick, decisive action, overriding the advice of some aides who believe getting active instantly may raise unrealistic expectations for Mideast peace.

The aides said one option under serious consideration is naming at least one high-profile envoy this week to help dig into the long-term problems in the region beyond the crisis in Gaza, a move that Obama hinted at last week in an interview with USA Today.

On CNN's "State of the Union With John King" on Sunday, incoming senior White House adviser David Axelrod said the president-elect "has said repeatedly that he intends to engage early and aggressively with diplomacy all over the world and using the men and women, the professionals who are in place, who are great, and -- where appropriate -- special envoys."

Pressed on whether this meant moving to deal with the Mideast crisis as soon as Tuesday, Axelrod said, "I think that the events around the world demand that he act quickly, and I think you'll see him act quickly."

CNN has learned that another option under consideration is an executive order raising fuel efficiency on automobiles, a move that would please environmentalists but put more pressure on the struggling U.S. auto industry.

For now, however, aides are being tight-lipped about which executive orders will be issued.

Incoming White House Chief of Staff Rahm Emanuel told reporters Saturday that "there are a number of things we're looking at" based on campaign promises the president-elect made on domestic and foreign policy.

Meanwhile, aides said Obama is strongly considering an economic speech to a joint session of Congress just weeks after taking office to communicate directly with the American people that the financial crisis is likely to continue for a long time -- even if his economic recovery plan is passed into law during the first 100 days.

Aides are expecting the speech to be delivered the week of February 23, after Congress returns from the Presidents Day recess. Democratic leaders are aiming to get the economic recovery plan to Obama's desk for his signature before that recess.

Obama has been trying to downplay expectations for quick results from his stimulus plan in recent speeches, which could give him some political breathing space to try and let the plan work.

"We're going to have a tough year, 2009," Obama told CNN in an interview Friday.

"I don't think that any economist disputes that we're in the worst economic crisis since the Great Depression," he said. "The good news is that we're getting a consensus around what needs to be done. We've got to have a bold, aggressive reinvestment in a recovery package. It's working its way through Congress. That's going to help create 3 to 4 million new jobs."

Aides said the speech to a joint session of Congress is part of a broader strategy by the incoming president to "engage with the public" about the financial crisis to try and build trust with the American people.