WASHINGTON (CNN) -- On their son's last night as president, a melancholy former President George H.W. Bush and his wife, Barbara, made an impromptu visit to the White House's press briefing room and told reporters how much they'll miss the building. 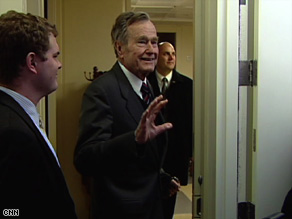 "We will miss coming and going, but it's time to move on," said the former president, who was a frequent visitor during his son's two terms in office.

"The Bushes are going to a happy life."

When a reporter suggested that perhaps one of their other sons, former Florida Gov. Jeb Bush, will take the White House someday, the former president smiled.

"Maybe Jeb will do something. I'd like to see him try," the former president said.

Barbara Bush, who was first lady from 1989 to 1993, said the hardest part of the night was saying goodbye to the White House residence staff a second time.

"In tears twice," she said, her eyes red.

She added that she and her husband are looking forward to attending Tuesday's inauguration of President-elect Barack Obama.

In addition to the inauguration, the former first couple was to attend a final dinner at the White House with current President Bush, first lady Laura Bush and the first couple's two daughters, Barbara and Jenna.

As the former first couple left the briefing room, some reporters and photographers spontaneously started clapping out of respect. Your view of history

The ex-president, who was using a long walking stick to get around, quipped, "You didn't clap when I was president, what the hell is going on?"