No moving trucks needed for Bushes on Inauguration Day

WASHINGTON (CNN) -- On Inauguration Day, there's one scene at the White House that won't be playing out exactly as it has during past transitions: the traditional moving of the outgoing first family's belongings. 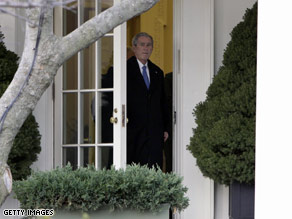 President Bush walks out of the White House Oval Office on January 10.

Anita McBride, chief of staff to first lady Laura Bush, tells CNN that the Bushes have moved almost all of their belongings out of the White House ahead of schedule.

"There won't be ... the moving trucks for the Bushes coming here," McBride said, adding, "The only things really left for President and Mrs. Bush are their personal belongings and luggage that they'll take that day."

McBride said Mrs. Bush directed residence staff early -- in the summer of 2008 -- to prepare the White House for the personal transition.

"It's probably the librarian in her," McBride said of Mrs. Bush, a former librarian. "Maybe we've got a bit of a Dewey Decimal system of move-out process, but that certainly made it easier for the residence staff, and they very much appreciate it," McBride said.

The actual clearing out of the Bushes' belongings began over the summer, McBride says, when many items were packed and taken to Crawford, Texas. Then, during the Christmas holiday, the Bushes moved their personal things out of Camp David, the presidential retreat in Maryland, according to McBride.

That means on Inauguration Day, while President Bush and Mrs. Bush, along with President-elect Obama and his family, are at the Capitol, staff in the White House residence will have more time to unpack and prepare the Obamas' personal belongings.

"They have rehearsed this over the last few weeks, everyone has their marching orders, it will be all hands on deck," said McBride.

"The residence staff will be here that morning, and they know what their jobs are when the moving truck for the Obamas' move-in arrives," she said, adding, "Their things will be unpacked, and their clothes will be in their rightful place, and whatever furniture that they may have selected from the White House furniture collection will be in the place that they want it to be."