For Obama, Lincoln was model president 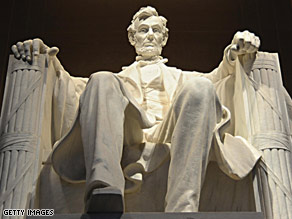 Barack Obama and his family recently visited the Lincoln Memorial in Washington.

In the last couple of years, several best-selling books have focused on the life and political skills of the nation's 16th president. And one man in particular has taken a particular interest in not just reading about the Illinois politician, but also modeling himself politically after him.

That man: Barack Obama, who will be sworn in as the nation's 44th -- and first African-American -- president Tuesday.

And the obsession is certainly not lost on the president-elect.

On January 10, he and his family visited the Lincoln Memorial in Washington, D.C.

Learn more about the Lincoln Memorial »

Obama will also be the first president to use the Lincoln Bible for his inauguration since Lincoln used it in 1861. Inauguration organizers have said Obama's inaugural theme, "A New Birth of Freedom," was inspired by Lincoln's Gettysburg Address.

The president-elect will travel on a whistlestop-like train trip Saturday from Philadelphia, Pennsylvania, to Washington. The tour follows the final leg of the train route taken by Lincoln.

And throughout the 2008 presidential campaign, Obama -- a Democrat who hails from the Land of Lincoln -- reminded audiences from coast to coast about the similarities between himself and the beloved political leader.

Obama told CBS last year that he was studying up on Lincoln -- who belonged to the Republican Party -- by reading presidential historian Doris Kearns Goodwin's 2005 book "Team of Rivals," which focuses on Lincoln's Cabinet.

"There is a wisdom there and a humility about his approach to government, even before he was president, that I just find very helpful," he said.

And in a letter to the residents of Illinois as he resigned from his U.S. Senate seat November 16, Obama quoted Lincoln: "I ask for your support, your prayers, and for us to 'confidently hope that all will yet be well.' "

At his presidential acceptance speech in Chicago, Illinois, on November 4, Obama used Lincoln as a guide for his ideology.

"As Lincoln said to a nation far more divided than ours, 'We are not enemies but friends. ... Though passion may have strained, it must not break our bonds of affection,' " Obama said.

The Lincoln playbook, however, is not lost on Republican politicians.

On Monday, President Bush invoked Lincoln in the final news conference of his presidency when responding to a reporter's question about criticism of his role as commander in chief.

"It's not the first time, however, in history that people have expressed themselves in sometimes undignified ways," Bush said. "I've been reading, you know, a lot about Abraham Lincoln during my presidency, and there was some pretty harsh discord when it came to the 16th president, just like there's been harsh discord for the 43rd president."

Historians have said President Richard Nixon related to Lincoln, too. Nixon once paid a midnight visit to the Lincoln Memorial at the height of the Vietnam War, searching for spiritual answers from a dead Civil War president -- but finding war protesters instead.

And the Lincoln-like phenomenon for politicos has translated to high interest among the American public.

The exhibit, according to the museum, brings together an extensive collection -- more than 60 objects associated with Lincoln's life, including an iron wedge used to split wood in the 1830s and his famous top hat, which he wore the night he was shot at Ford's Theatre by John Wilkes Booth.

There are also more than 50 photographs, portraits, paintings and sketches documenting the life and times of the man who united a nation after a brutal war.

Interactive: Ed Hornick narrates a slideshow from the museum's exhibit »

Curator Harry Rubenstein said the exhibit will give people flocking into town for the inauguration a chance to understand the history behind a man Obama cherishes as his mentor. iReport.com: Send your photos from the inauguration

"Hopefully, when people go through this exhibit, they get a better understanding of Abraham Lincoln -- the things he went through, his life, his achievements, his contributions and the kind of personal drive," he said. "I hope they get a sense of how much the nation has changed."

"One quality I think you see in both individuals is this incredible drive to make a contribution. That's one of the most compelling aspects of the Lincoln story," he added.

Some historians, however, worry that all of this "Lincoln love" is a bit much.

"I worry when presidents try to massage the lessons of history to fit the contours of their own problems and their own reactions," said historian Harold Holzer, author of the book "Lincoln President-Elect."

Columbia University history professor Eric Foner, also a Lincoln scholar, has said people should take a step back from the comparisons.

"Lincoln is a great man, and people should learn from him. But I think, as a historian, people ought to calm down a little about these comparisons," he said. "They are entirely different situations, worlds, political systems. There aren't, I think, a lot of exact direct lessons one can or should necessarily try to learn from Lincoln."

Foner, author of the new book "Our Lincoln: New Perspectives on Lincoln and His World," said Lincoln is simply "a Rorschach test" for all politicians.

"Everybody finds themselves in Lincoln. Everybody finds what they want to find in Lincoln. There are dozens of Lincolns out there. So saying 'I'm reading Lincoln or modeling myself on Lincoln' doesn't really tell us a heck of a lot."

Others give Obama -- and fellow Lincoln lovers -- the benefit of the doubt.

Historian Ronald White said that both Obama and Lincoln had a "tremendous trust in words and the power of language."

"And I think today, we come with a real kind of cynicism. ... It's only words. And yet I think underneath the words are the public's perception of looking for someone with integrity and authenticity and not someone simply playing a role," White said.

White, author of the book "A. Lincoln: A Biography," has lectured on Lincoln at the White House and the Library of Congress.

As for temperamental similarities, McPherson said Lincoln occasionally did lose his temper, but he "usually managed to maintain his cool."

"This kind of temperament -- keeping your cool, keeping your temper, trying to base your decisions on rational thought rather than emotions or temporary explosions of temper -- I think they're similar in that respect and that was a really important factor in Lincoln's leadership qualities." Read more about McPherson's take on Lincoln

And that disposition could be something Obama takes into consideration when he sits down for the first time in the Oval Office -- and undoubtedly faces the first wave of criticism.