WASHINGTON (CNN) -- If anything were to go seriously wrong at Tuesday's inauguration of Barack Obama, Homeland Security Secretary Michael Chertoff is the man who would manage the crisis response. He is trying to make sure everything goes right. 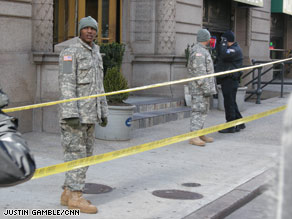 "I don't anticipate anything disruptive. Part of my job is to hope for the best and plan for the worst," Chertoff said during a final tour of key sites across Washington. CNN exclusively accompanied Chertoff on the tour.

Chertoff said authorities are not aware of any credible threat to the inauguration.

"We are constantly scrubbing and rescrubbing intelligence to see if there is a threat that we should be concerned about. And that is going to continue, frankly, through the inauguration itself," he said. "We are literally going to be watching this every minute between now and the conclusion of events on the 20th."

It is difficult to detect individuals or small groups intent on causing trouble, and Chertoff is most worried about them.

"I am still focused on the kind of event we had at Virginia Tech: one disturbed person kills a bunch of people. So whether the motivation is racism or some psychological disorder ... in an open society, it is impossible to keep a single individual from doing some damage," he said.

Chertoff's first stop was the multi-agency command center from which he will monitor inaugural events. This is the security nerve center for the inauguration, with representatives of federal, state and local agencies that will help secure the swearing-in, the parade, the balls and other special events.

"Everyone has a common picture of what is going on," Chertoff said. "If something arises, we know who has the ball. We know who plays a supporting role. If an issue that is not anticipated comes up, we are in the room; we can figure out what do; we can make a decision."

Chertoff also took a swing by the U.S. Capitol, where Obama will be sworn in. The west side of the Capitol gives a panoramic view of the National Mall, where crowds will assemble to watch Tuesday's events.

Chertoff said it was useful to see the setting firsthand.

"You get a sense of the physical layout. You may get an idea of where the potential congestion areas or challenges are in terms of managing that large crowd," he said.

The presidential reviewing stand was still under construction in front of the White House. This is where Obama will view the parade in his honor.

In the biting cold, Chertoff got a quick tour and received a briefing from the United States Secret Service.

Turning up his, Chertoff expressed concern that the public will not plan and prepare for the weather, which is forecast to remain frigid. "The worst thing in the world would be for someone to come dressed like he is going to go to Bermuda, with no food or water or place to stay."

Critics have accused inauguration organizers of engaging in security overkill, but Chertoff said he has tried to strike a balance.

"You don't want to make this like an armed camp, because it spoils the event itself. At the same time, you want to have enough capacity so you can deal with any foreseeable issue," he said.

Unlike other Bush administration officials, Chertoff will not leave his job when Obama is sworn in. He will stay on until the morning of January 21, to ensure continuity through this major security event and to allow his designated successor, Janet Napolitano, to enjoy the festivities.

Chertoff believes that this is the largest and most complex security event in history.

An estimated 8,000 police officers will be on duty, along with almost a thousand FBI personnel, Transportation Security Administration screeners and others, including 10,000 National Guard troops. Chertoff said that another 20,000 members of the National Guard are being held in reserve.

"I think we are ready," Chertoff said.