(CNN) -- Barack Obama has talked of ripping out the White House bowling alley and replacing it with a basketball court. The former reserve player for Punahou High School's 1979 state championship team brings an enthusiasm for pickup basketball games to a place where golf, baseball and football have been the most-discussed sports. 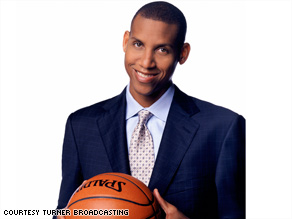 And if he puts hoops in the White House, Reggie Miller, the retired basketball star and sports broadcaster, wants in.

"I would love to be the first to go there and play," said Miller, whose record-breaking 2,560 three-pointers with the Indiana Pacers electrified basketball fans. Today Miller, 43, is an NBA analyst for TNT, which is owned by Turner Broadcasting, parent company of CNN.

Miller and others have said Obama's playing style yields clues to the type of president he will be. Miller, who said he backed Obama in the election, spoke Monday to CNN.com. iReport.com: What would you like to ask Obama?

CNN: Do you know Barack Obama?

Reggie Miller: I have never met him personally, but from afar, obviously I admire the man and the courage and the strength, the wisdom. I respect how much of a family man he is.

CNN: Where does basketball fit in your view of Barack Obama?

Miller: It seems like he has a regular pickup game, which I like because as a ballplayer, you like to do the same routine. ... He plays with the same guys, he likes to get a good sweat in. ... When you get a good workout in, you feel good for the rest of the day. It helps clear the mind.

CNN: He's a left-hander; he likes to fake right and go to the left?

Miller: I've seen clips of his Punahou [high school] days, when he played in Hawaii, and I saw that HBO special with Bryant Gumbel when they had that informal game. ... He is a point guard, and most point guards are right-handed, so it would be definitely be difficult to guard a point guard that was left-handed.

And in that [HBO] clip, I loved his decision-making, because it looked like he tried to get everyone involved, until it was game point and it was tied up.

But I will say this, if I was playing against him in a pickup game, I would definitely force him right because it looks like he loves to go left.

CNN: Does he remind you of anyone you played against?

CNN: From what you've seen, how good a player is Obama?

Miller: I would not mind picking him up on my squad; if there were 10 guys and we had to pick, he could definitely be in my squad. Because he knows what his strength is -- making sure that everyone gets involved, and that's the kind of point guard I want. Those are guys like Magic Johnson, Mark Jackson, John Stockton, it's not all about them; it's about let's make sure our team is good. He's going to get the ball to everyone.

CNN: Speaking of being commander in chief, what are the lessons that you take away from Obama's basketball that you think would be useful?

Miller: If you look at his demeanor, he's very cool; you have to be cool under pressure. You can't make hasty decisions. You've got to look at the full picture as a whole and then you assess it. And I think from a strategic and a political standpoint, I think that very much sums up Mr. Obama.

You look at him during the debate and during the campaign, he pretty much never got too high and never got too low; he just kind of stayed right in the middle. When you're making the decisions that he's going to be making, for our economy, for Iraq, Afghanistan, you want someone who's levelheaded who's going to look at the big picture, who's going to rely on his Cabinet, which would be the other players.

You want them to all be on same page, which you want your starting five to be, and then you go out there and execute it.

CNN: You think he's going to have an impact on the sport of basketball by example?

Miller: It's not just basketball, I think sports in general. You know he's already said yes, "I think we should have a BCS" [playoff system for deciding the nation's college football championship], and I think everyone agrees with him. I think his love of basketball is only going to help the high school, collegiate and professional ranks. ... For sports in general, it's good to have a person in the White House who's physically fit, who loves sports but also understands and knows how to run a country.

CNN: In that order?

I think getting jobs is probably first and foremost and getting our economy straight and getting our troops home, I think those are the most important things for the president-elect. But if he does find time to get a BCS playoff, that would be nice.