Another first -- woman to give inaugural sermon

(CNN) -- The Rev. Sharon Watkins will deliver the sermon at the traditional National Prayer Service on January 21, the day after Barack Obama is sworn in as president, the Presidential Inaugural Committee announced Sunday. 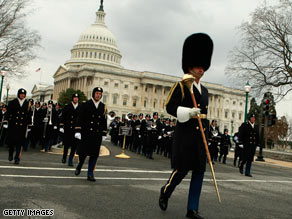 Marching bands practice in front of the U.S. Capitol during an inaugural rehearsal on Sunday.

Watkins, the general minister and president of the 700,000-member church Disciples of Christ, will be the first woman to deliver the sermon at the inaugural event.

It takes place at the National Cathedral in northwest Washington.

"I am truly honored to speak at this historic occasion," Watkins said in a news release from the committee.

She added, "I hope that my message will call us to believe in something bigger than ourselves and remind us to reach out to all of our neighbors to build communities of possibility."

The National Prayer Service is a tradition dating back to the nation's first president, the inaugural committee said.

The service includes prayers and hymns delivered by various religious leaders. iReport.com: Are you attending the inauguration?