Burris says he's honored to be seated in the Senate

WASHINGTON (CNN) -- Illinois Senate-designate Roland Burris said Monday afternoon that he is "truly humbled and honored" to learn he will be seated in the Senate later this week. 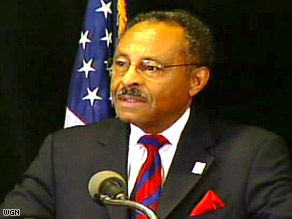 Senate-designate Roland Burris, D-Illinois, said Monday that he is humbled by news that he will be seated.

"The Secretary of the Senate has determined that the new credentials presented today on behalf of Mr. Burris now satisfy Senate Rules and validate his appointment to the vacant Illinois Senate seat. In addition, as we requested, Mr. Burris has provided sworn testimony before the Illinois House Committee on Impeachment regarding the circumstances of his appointment," the two said in a statement.

At a news conference around 5:30 p.m. ET, Burris publicly thanked Reid and Durbin.

"It will be my honor to both serve with them and learn from them," he said. "I'm thankful for the opportunity to serve, and I ask for your support and prayers."

Burris also took time to praise Illinois Secretary of State Jesse White, who opposed seating Burris, and did not sign his appointment certificate, although his office stamped it Friday to show it had been received.

"He [White] is owed a debt of gratitude. He also happened to be someone's whose autograph I cherish," Burris said. "[He's] an honorable man."

In the joint statement, Reid and Durbin said Burris would "be accorded all the rights and privileges of a Senator-elect," adding that "barring objections from Senate Republicans, we expect Senator-designee Burris to be sworn in and formally seated later this week. We are working with him and the office of the Vice President to determine the date and time of the swearing-in."

A spokesman for the Obama transition team said the president-elect knows Burris and has a "high regard for him."

"He looks forward to working with Senator Burris and the rest of the United States Senate to rebuild our economy and meet the great challenges of our time," Dan Pfeiffer said.

Some Senate Democrats, however, said Burris should not be seated because he was appointed to the Senate seat by Illinois Gov. Rod Blagojevich, who faces corruption charges and who is accused of scheming to sell the seat vacated by President-elect Barack Obama.

The Illinois Supreme Court ruled Friday that White does not have to sign off on the appointment for it to be valid.

Still, the Senate parliamentarian and legal counsel worked over the weekend examining in-house rules on the issue. Democratic sources said that if Burris or his attorney is at the Capitol on Monday, they would probably receive a decision.

Burris told CBS' "Face the Nation" on Sunday that his attorney would meet with the Senate's legal counsel on Monday.

In refusing to seat Burris last week, the Senate cited a 125-year-old Senate rule requiring the signature to certify an appointment.

But in a victory for Blagojevich, the Illinois high court said that "no explanation has been given as to how any rule of the Senate, whether it be formal or merely a matter of tradition, could supersede the authority to fill vacancies conferred on the states by the federal constitution."

Even if White's stamp is accepted as valid, Senate Democrats still plan to take the matter to the Senate Rules Committee, so an investigation can be conducted and the matter can be voted on by the full Senate before Burris is seated.

The Illinois House voted Friday to impeach Blagojevich, who has denied any wrongdoing.