(CNN) -- President-elect Barack Obama said Sunday the suffering on both sides of Gaza's borders has led him to ramp up his commitment to working for a peace deal in the Middle East. 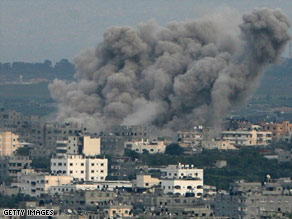 Smoke billows over Jabalya, Gaza, after an Israeli airstrike on Sunday.

"When you see civilians, whether Palestinian or Israeli, harmed, under hardship, it's heartbreaking. And obviously what that does is it makes me much more determined to try to break a deadlock that has gone on for decades now," he told ABC's "This Week."

Rejecting criticism that he has been relatively quiet on the violence in Gaza, Obama said he believes "the one area where the principle of 'one president at a time' has to hold is when it comes to foreign policy. We cannot have two administrations at the same time simultaneously sending signals in a volatile situation.

"But what I am doing right now is putting together the team so that on January 20, starting on day one, we have the best possible people who are going to be immediately engaged in the Middle East peace process as a whole, that are going to be engaging with all of the actors there, that will work to create a strategic approach that ensures that both Israelis and Palestinians can meet their aspirations," he said.

Watch the latest on the Israel-Gaza conflict »

Asked whether he will be building on President Bush's policies toward the region or offering "a clean break," Obama responded: "I think that if you look not just at the Bush administration, but also what happened under the Clinton administration, you are seeing the general outlines of an approach. And I think that players in the region understand the compromises that are going to need to be made."

Dealing with Iran, Obama said, will be "one of our biggest challenges. ... Not only is Iran exporting terrorism through Hamas, through Hezbollah, but they are pursuing a nuclear weapon that could potentially trigger a nuclear arms race in the Middle East."

Iran insists it is not pursuing a nuclear weapon, only nuclear energy. But the Bush administration has said Iran's nuclear energy program is a guise to build nuclear weapons. European officials -- some of whom share the U.S. concerns -- have repeatedly tried to broker a resolution to that stalemate.

During the presidential election, Obama vowed to meet with leaders of Iran and several other nations without preconditions during his first year, though his campaign later added that there would be "preparation."

Obama said Sunday that his commitment to "engagement" early on will help send a "signal that we respect the aspirations of the Iranian people, but that we also have certain expectations in terms of how a international actor behaves."

While vowing quick action on a host of issues, the president-elect warned that some major tasks will take time. Among them is the closing of the prison at the U.S. naval base at Guantanamo Bay, Cuba, where about 250 men considered by the government to be suspected terrorists continue to be held.

Asked whether the closure will take place in his first 100 days in office, Obama responded, "That is a challenge. I think it's going to take some time. ... But I don't want to be ambiguous about this. We are going to close Guantanamo and we are going to make sure that the procedures we set up are ones that abide by our Constitution."

Since winning the presidency, Obama has been given intelligence briefings on top secret information that he did not have access to as a candidate or as a U.S. senator. iReport.com: Share thoughts, reactions to crisis in the Middle East

Asked whether he's been shocked by anything he's learned involving U.S. security, he responded, "There hasn't been something that was eye-popping. But, you know, the situation still requires vigilance."