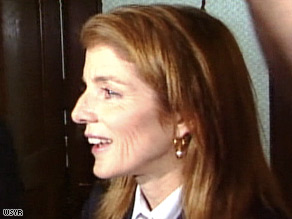 Erin Duggan, Paterson's spokesman, said the two met at the governor's Manhattan office about 2 p.m. ET. She would not disclose what the pair talked about, nor say how long the meeting lasted.

Kennedy is one of the candidates hoping to replace Hillary Clinton as New York's junior senator if the Senate confirms Clinton as secretary of state.

Paterson, who has the sole responsibility to replace Clinton, has been the target of intense lobbying efforts by would-be senators in recent weeks.

Whoever the governor picks would serve for two years before running in a special election in 2010. If the candidate won that contest, that person would have to run again in 2012, when Clinton's current term ends.

Paterson is a Democrat, so the seat is likely to remain in the party's hands.

Kennedy, daughter of the late President John F. Kennedy and niece of longtime Massachusetts Sen. Ted Kennedy, has received the most media attention. However, critics are questioning whether she's ready to follow the political path taken by family members.

Kennedy, 51, has been involved in education reform and women's issues, but she has never held public office and has mostly stayed out of the public spotlight.