(CNN) -- President-elect Barack Obama left no doubt about his position on the hottest topic in the world of college football. 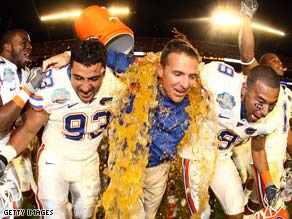 Florida came out on top over Oklahoma in Thursday night's BCS championship game.

"We need a playoff," Obama told reporters after being asked about Florida's 24-14 victory over Oklahoma in Thursday night's BCS championship game. "If I'm Utah, or if I'm USC or if I'm Texas, I might still have some quibbles."

Since its inception in 1998, the NCAA's Bowl Championship Series has weathered criticism from nearly all directions.

The BCS is the system that chooses the contenders for college football's most prominent postseason games: the Fiesta, Orange, Rose and Sugar bowls, as well the National Championship game, which this year put Oklahoma against Florida.

Florida, Oklahoma and Texas all finished the season with one loss. Texas actually handed Oklahoma its one defeat in October on a neutral field.

When the BCS computer system put Florida and Oklahoma in this year's national championship game, the annual back-and-forth over whether to have a college football playoff system was reignited.

Utah was the only college football team to finish the season undefeated, but its conference is considered less competitive and therefore was put at a statistical disadvantage in the BCS.

Friday was not the first time Obama stated his preference for a playoff system.

"It would add three extra weeks to the season," Obama said in a "60 Minutes" interview just after his election. "You could trim back on the regular season. I don't know any serious fan of college football who has disagreed with me on this. So, I'm going to throw my weight around a little bit. I think it's the right thing to do."

Each year, Republicans and Democrats alike are angered by what they see as inherent unfairness in the BCS arrangement. In 2008, legislators -- for one reason or another -- drafted legislation to invalidate the BCS on grounds that it misdirects commerce.

The bill, originally introduced December 10, would "prohibit, as an unfair and deceptive act or practice, the promotion, marketing, and advertising of any post-season NCAA Division I football game as a national championship game unless such game is the culmination of a fair and equitable playoff system."

Barton said Thursday that those watching the championship game are being "bamboozled."

"This year's BCS failure proves once again that it's time for college football to come up with a fair way to determine its champion," he said in a statement. "It does pit two very worthy teams against each other, but can anyone say unequivocally that the winner will be the best team in the country?"

The BCS governing body -- made up of the commissioners from all NCAA Division I-A conferences; the athletics director from Notre Dame, which isn't affiliated with a conference; and representatives from each bowl organization -- announced in spring 2008 that the system would be used through at least the 2014 season.