WASHINGTON (CNN) -- President-elect Barack Obama will invoke God when he takes the oath of office January 20, despite a lawsuit filed by atheist and non-religious groups, according to an attorney for Chief Justice John Roberts, who will administer the oath. 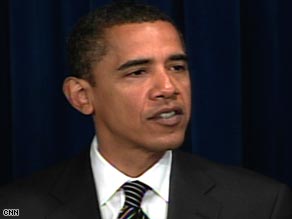 President-elect Barack Obama has asked to invoke the phrase "so help me God" at the end of his oath.

The groups have sued in federal court to block any mention of God during the inaugural ceremonies. Roberts was among those named in the suit.

However, Obama wishes to conclude the oath with the phrase "so help me God," Jeffrey Minear, an attorney and administrative assistant for Roberts, told a federal court in documents Friday.

Some chief executives have embellished the oath with "so help me God." It is not constitutionally required, unlike in other federal oaths.

Historians have been at odds over whether George Washington established precedent by invoking the phrase on his own at the first inaugural in 1789. The Library of Congress Web site says he did. Most presidents have used the phrase. iReport.com: Your photos from the inauguration

Inaugural officials and presidents or presidents-elect usually coordinate behind the scenes on whether the judge or government official administering the phrase will invoke it.

Michael Newdow, supported by several groups including the American Humanist Association, claims in his lawsuit that "so help me God" violates the constitutional ban on government "endorsement" of religion. He asked a federal judge to intervene and block references of God or religion in the formal ceremonies.

The lawsuit also opposes the traditional invocation and benediction to be delivered by pastors invited by Obama.

"There can be no purpose for placing 'so help me God' in an oath or sponsoring prayers to God, other than promoting the particular point of view that God exists," according to the lawsuit.

The federal government revealed in its response that Obama wants to use the phrase. The declaration was apparently aimed at blunting Newdow's concession that Obama could add the phrase on his own but that Roberts or any government official should not force or prompt him to say it.

Among those named in the lawsuit besides the 53-year-old chief justice are the Presidential Inauguration Committee; the Joint Congressional Committee on Inauguration Ceremonies and its chairwoman, Sen. Dianne Feinstein (D-California); and the Armed Forces Inaugural Committee and its commander, Maj. Gen. Richard Rowe Jr.

Newdow said December 31 that he did not name Obama in his suit because in addition to participating as a government official in the ceremony, Obama possesses rights as an individual that allow him to express religious beliefs.

A decision from the federal judge is expected in the next few days.

The high court ruled against Newdow in 2004 after he tried to block the Pledge of Allegiance from being recited at his daughter's Sacramento, California-area public school because it contains the phrase "under God."

He argued the case himself before the justices, making an impassioned plea that the teacher-led pledge forces religion on impressionable youngsters and carries the stamp of government approval.