WASHINGTON (CNN) -- Key measures of President-elect Barack Obama's economic recovery plan are facing a barrage of criticism from some Senate Democrats, with one charging that the plan's tax breaks were a return to "trickledown" economics. 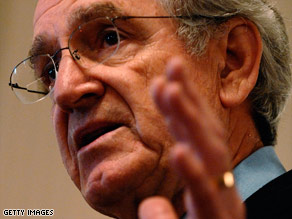 Sen. Tom Harkin, D-Iowa, says many of the tax credits in the stimulus plan amount to "trickledown" economics.

Democrats also appealed to the Obama team to figure out a way to ensure that money for roads and bridges filters down to cities, counties and local planning boards.

The aide said some members are "fearful that governors will have all the say."

Wisconsin Democrat Ron Kind, a member of the House tax writing committee, described the meeting as a discussion on a variety of proposals.

"I don't think anyone really expects this stuff is going to come down from some mountain written on tablets and given to the Congress. But certainly, there's going to be a lot of deference toward what the administration is thinking, but there are areas that can be tweaked and improved upon," Kind said.

Democrats made it clear that they plan to put their stamp on the massive economic stimulus bill.

New York Democrat Charlie Rangel, who chairs the tax panel, said negotiations are continuing about which specific tax proposals will remain in the package.

Obama wants a bill on his desk by mid-February, putting negotiations on a fast track.

The Obama team will return Sunday for another session with Senate Democrats.

Summers held back-to-back meetings Friday, first with the full House Democratic caucus and then with the Democratic members of the Ways and Means committee, which is drafting the tax cut part of the plan.

On Thursday, key members of Obama's party emerged from a closed-door meeting of the Senate Finance Committee criticizing central tax measures of the president-elect's proposals.

In particular, members criticized said they did not think the idea of giving employers a $3,000 tax credit for each employee they hire would work.

"I'd rather spend the money on the infrastructure, on direct investment, on energy conversion and other kinds of things much more directly and much more rapidly and much more certainly create a real job," said Sen. John Kerry, D-Massachusetts.

Several Democrats also said they were down on a tax proposal for payroll tax credits -- amounting to about $20 per paycheck and totaling $500 per person and $1,000 for couples earning less that $200,000 a year.

Sen. Ron Wyden, D-Oregon, said he doubted that proposal would do much to stimulate the economy.

"We have an example from the first stimulus that indicates just giving people $500 to $600, while certainly welcome when there's this much economic hurt, may not be the best use of stimulus," Wyden said.

Instead, pumping more money into infrastructure spending would be more effective in creating jobs, Wyden said.

None of the senators CNN spoke with after the Finance Committee meeting said they thought the opposition to these provisions would derail the bill but suggested that many meetings would be needed with the Obama team to hammer out an agreement.

On the other side of the Capitol, House Democratic Whip Jim Clyburn, D-South Carolina, said Democrats were discussing including the alternative minimum tax as part of the package, in addition to the payroll tax cut and business tax credits the Obama team has proposed.

Clyburn made it clear that Hill Democrats aren't inclined to give Obama everything he wants.

"Democrats are going to be Democrats," he said. "We're creative thinkers. We don't believe in group think."

Speaker Nancy Pelosi said Thursday that House committees will begin action on Obama's proposed economic recovery package in the next couple of weeks, with a vote in the full House slated for the week after Obama's inauguration.

In a speech Thursday, Obama said it was imperative that Congress move quickly to pass the stimulus package once he takes office.

"We start 2009 in the midst of a crisis unlike any we have seen in our lifetime, a crisis that has only deepened over the last few weeks," Obama said at George Mason University in Virginia.

Watch Obama call for "dramatic action" on the economy »

All About Nancy Pelosi • Economic Issues • U.S. House Committee on Ways and Means