CHICAGO, Illinois (CNN) -- Hours after being impeached by an overwhelming vote in the Illinois House of Representatives, a defiant Gov. Rod Blagojevich proclaimed Friday that he was not guilty of impeachable offenses and would fight "every step of the way." 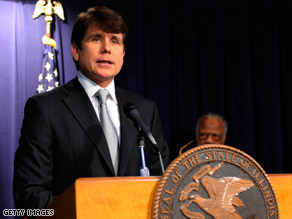 "The House action today was not a surprise. It was a foregone conclusion," Blagojevich said at a news conference in Chicago. "From the very moment of my re-election, I've been engaged in a struggle with the House to try to get things done for people.

"The House's action today, and the causes of the impeachment, are because I've done things to fight for families who are with me here today," he added.

Watch Blagojevich fire back at critics »

Blagojevich said one of the reasons the House voted to impeach him because he wanted to expand health care benefits to Illinois residents.

"Is that an impeachable offense?" Blagojevich asked.

As he stated earlier, Blagojevich said he had not done anything wrong.

Watch Blagojevich declare he is not guilty »

The vote was 114-1, with three representatives not voting.

Watch the announcement of the impeachment vote »

State Rep. Milton Patterson, D-Chicago, said he voted against impeachment because "I did not feel like I had enough information, based on the report, to make an informed decision to remove the governor from office."

The matter now moves to the state Senate, which will try the case. A two-thirds vote in the Senate is required to remove the governor from office.

Blagojevich's actions "show a public servant who is prepared to turn public service into an avenue for private benefit," the chairwoman of the House impeachment committee, Rep. Barbara Flynn Currie, D-Chicago, said at the start of Friday's impeachment debate.

Currie added, "The totality of the evidence shows that Gov. Blagojevich has forfeited his right to hold office. Whatever their stations, whether petty thieves or governors, those who break the law must not be immune from the consequences and must be held to account for their actions."

Rep. Tom Cross, Republican leader in the Illinois House, said Blagojevich "has violated [his] oath of office, and that trust that he was given by being elected twice has eroded, has evaporated, has completely gone."

Blagojevich was arrested last month after federal prosecutors alleged, among other things, that he tried to sell the U.S. Senate seat that President-elect Barack Obama vacated.

"Today is the day that we begin to give back democracy to the people of the state of Illinois," Democratic Rep. Jack Franks, a panel member, said as he cast his aye vote Thursday night.

The committee heard testimony Thursday from Roland Burris, the man Blagojevich appointed to succeed Obama in the Senate.

Burris denied any quid pro quo with Blagojevich for his appointment to the Senate.

Burris, former attorney general for Illinois, is not accused of engaging in "pay-to-play" politics with Blagojevich.

"I would have appreciated it if he had stepped aside, and we would not have been made the laughingstock of the country," said Rep. Mary Flowers, another Democrat. She noted, however, that the governor is "innocent until proven guilty."

The 21-member committee looked into Blagojevich's actions on a number of issues beyond the federal allegations, including a claim that he withheld state money from a children's hospital until he received a $50,000 campaign donation.

"The evidence is overwhelmingly damning," he said.

Blagojevich was arrested December 9 but has not been indicted. A federal judge in Chicago told Fitzgerald that he has until April 7 to decide whether to charge the Illinois governor.

The committee's report said it found the government's allegations against Blagojevich "shocking" and believes the information in the federal complaint "is sufficiently credible to demonstrate an abuse of office" that was "inconsistent with the governor's constitutional oath."

The report said Blagojevich did not need to be found guilty of a crime for the House to impeach him. "It would, in fact, be unreasonable to limit impeachable offenses to criminal conduct," the report said.

"An impeachment inquiry is not a criminal proceeding, and its purpose is not punitive. Rather, impeachment is a remedial proceeding to protect the public from an officer who has abused his position of trust."

The committee pointed out that the criminal complaint against Blagojevich alleges that he was secretly taped saying he would not appoint anyone to Obama's seat without some form of compensation. iReport.com: Do you trust your political leaders?

"The governor repeatedly demonstrated that his decision to appoint a senator would not be based on merits of the candidate or on public policy but rather on how that appointment could benefit him personally," the report said.