BCS is a political football in 2009

(CNN) -- Since its inception in 1998, the NCAA's Bowl Championship Series has weathered criticism from nearly all directions. 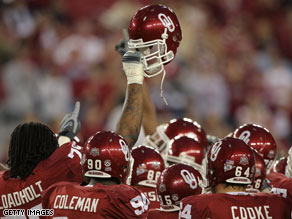 Oklahoma faces off in the National Championship game Thursday against Florida.

But entering 2009, the BCS may encounter a perfect storm: a unique, bipartisan legislative current and the imminent thunderhead of an Obama administration.

The BCS is the system that chooses the contenders for college football's most prominent postseason games: the Fiesta, Orange, Rose and Sugar bowls, as well the National Championship game, which this year pits Oklahoma against Florida on Thursday.

In a post-election "60 Minutes" interview, President-elect Barack Obama made clear his stance on the issue: "This is important. I'm going to throw my weight around a little bit. [If] you've got a bunch of teams who play throughout the season [and] there's no clear decisive winner ... we should be creating a playoff system."

Republicans and Democrats alike each year are angered by what they see as inherent unfairness in the arrangement. In 2008, legislators -- for one reason or another -- drafted legislation to invalidate the BCS on grounds that it misdirects commerce.

And so, on December 10, Rep. Joe Barton, R-Texas, took the next step, introducing the College Football Playoff Act of 2008.

If passed, this bill would "prohibit, as an unfair and deceptive act or practice, the promotion, marketing, and advertising of any post-season NCAA Division I football game as a national championship game unless such game is the culmination of a fair and equitable playoff system."

The BCS, of course, would have things go differently. Made up of the commissioners from all NCAA Division I-A conferences; the athletics director from Notre Dame, which isn't affiliated with a conference; and representatives from each bowl organization, the BCS governing body announced in spring 2008 that the system would be used through at least the 2014 season.