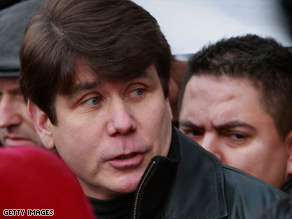 Blagojevich was arrested last month after federal prosecutors alleged, among other things, that he tried to sell the Senate seat President-elect Barack Obama vacated.

The issue will now be taken up by the full Illinois state House of Representatives.

"Today is the day that we begin to give back democracy to the people of the state of Illinois," Democratic Rep. Jack Franks said as he cast his "aye" vote.

Burris denied any quid pro quo with Blagojevich for his appointment to the U.S. Senate. Burris, former attorney general for Illinois, is not accused of engaging in "pay-to-play" politics with Blagojevich.

Blagojevich denies any wrongdoing and has rejected calls for his resignation.

"I would have appreciated it if he had stepped aside, and we would not have been made the laughing stock of the country," said Rep. Mary Flowers, another Democrat. She noted, however, that the governor is "innocent until proven guilty."

The 21-member committee looked into Blagojevich's actions on a number of issues beyond the federal allegations, including an allegation he withheld state money from a children's hospital until he received a $50,000 campaign donation.

"The evidence is overwhelmingly damning, and with that I vote aye," he said.

Blagojevich was arrested December 9, but has not been indicted. A federal judge in Chicago told Fitzgerald he has until April 7 to decide whether to charge the Illinois governor.

The committee's report says it found the government's allegations against Blagojevich "shocking" and believes the information in the federal complaint "is sufficiently credible to demonstrate an abuse of office" that was "inconsistent with the governor's constitutional oath."

If the full House votes to impeach the governor, the action moves to the state Senate, which would try the case and decide whether to remove him from office.

The Illinois committee's report points out that Blagojevich does not need to be found guilty of a crime for the House to impeach him.

"An impeachment inquiry is not a criminal proceeding and its purpose is not punitive. Rather, impeachment is a remedial proceeding to protect the public from an officer who has abused his position of trust," the report says.

The committee points out that the criminal complaint against Blagojevich alleges he was secretly taped saying he would not appoint anyone to Obama's seat without some form of compensation. iReport.com: Do you trust your political leaders?

"The governor repeatedly demonstrated that his decision to appoint a senator would not be based on merits of the candidate or on public policy, but rather on how that appointment could benefit him personally," the report says.

Blagojevich declined the committee's offer to testify on his own behalf, the report says.