By Jordan Lorence
Special to CNN

Editor's note: Jordan Lorence is senior legal counsel for the Alliance Defense Fund, a nonprofit organization of Christian attorneys. He has litigated religious liberty and free speech cases since 1984, including the Southworth case before the U.S. Supreme Court in 1999, involving mandatory student fees at public universities, and a 2004 case that resulted in a California Supreme Court ruling that marriage licenses issued by San Francisco to same-sex couples were invalid. 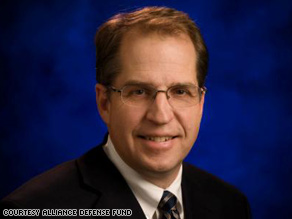 SCOTTSDALE, Arizona (CNN) -- Proponents of redefining marriage couldn't wait for the new president to be sworn in before demanding that he erase from the inauguration ceremony a prominent American who disagrees with them.

The target of their rhetorical bombardment is Rick Warren, the popular Christian pastor from Southern California.

President-elect Barack Obama has asked Warren to give the invocation at his inauguration. Not so fast, cries Kathryn Kolbert, head of People for the American Way, an organization that claims to advance equality and freedom of speech and religion (but not for Rick Warren and those who agree with his marriage views) in a piece published on CNN.com.

Warren's grave sin? Along with 52 percent of California voters, he supported California's Proposition 8, which affirmed the definition of marriage as between one man and one woman. What a radical!

Though Warren will only be praying for the country's future (not giving a speech about marriage), Kolbert and others are pressuring Obama to set a precedent for his administration of publicly shunning someone who supports the traditional definition of marriage.

They want people like Warren silenced and ostracized for their "hate speech," defined today as disagreeing with their agenda to impose a redefinition of marriage on an unwilling America. Obama, to his credit, has resisted their strident demands.

The attacks on Warren are the latest in a series of coercive, intimidating attacks on supporters of traditional marriage.

Now, activists have ramped up their strong-arm tactics by pushing the president-elect to ban Warren from appearing at the inauguration.

This is amazingly audacious, in light of the fact that on marriage, the overwhelming majority of Americans and, indeed, humanity, agrees with Warren. Americans have voted to preserve marriage in all 30 states where it has been on the ballot by an average vote of more than 65 percent.

The collective experience and wisdom of every major civilization from the dawn of time agrees that societies function best and children are best protected when marriage is defined as between one man and one woman. Warren and those who agree with him want all nations to experience these benefits of marriage when it is rightly defined and consistently practiced.

Ironically, Obama has repeatedly stated that he agrees "that marriage is the union between a man and a woman." Does Kolbert question his fitness to serve as president in light of his allegedly "bigoted" views on marriage?

Kolbert brazenly denies that she and other activists desire to silence pastors like Warren because of their marriage views. She is indignant that Warren and others spread the "big lie" that redefining marriage would threaten the freedom of speech and religious liberties of those who hold the view shared by the vast majority of Americans.

Her argument is disarming in its pure duplicity. Part of Kolbert's case against Warren, who she thinks should not be speaking at such an important public ceremony, is that he believes that folks like her are working to ban people like him from speaking at public ceremonies. Thus, the "big lie" becomes an obvious truth.

This is really all about ideological purity -- and purging. Are the activists proposing that no one should be permitted to speak at the inauguration if they hold beliefs on marriage contrary to hers and her ideological bedfellows? How can publicly snubbing the influential and respected Warren advance what Kolbert calls "the values of unity and respect ... on which President-elect Obama campaigned?"

It won't. But it will surely send a message to those who believe in marriage, that they will be viciously attacked for expressing, or merely believing, that marriage is defined as between one man and one woman. Ms. Kolbert provides just the latest example of how the forces of "tolerance" and "diversity" quickly abandon their principles of "live and let live" when somebody disagrees with them.

The opinions expressed in this commentary are solely those of Jordan Lorence.