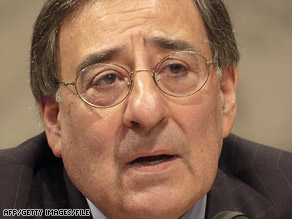 Leon Panetta, who has a strong background in economics, was chief of staff for President Bill Clinton.

Panetta, 70, has had a long political career, beginning in 1966 when he served as a legislative assistant to U.S. Sen. Thomas H. Kuchel. R-California.

He was elected to the House of Representatives in 1977, serving California's 16th (now 17th) District until Clinton appointed him to head the Office of Budget and Management in 1993. He was chief of staff from 1994 to 1997.

Panetta and his wife, Sylvia, founded and co-direct the Leon and Sylvia Panetta Institute for Public Policy at California State University, which provides study opportunities for students there and at several other schools. He serves on several boards and committees, and lectures internationally on economics.

With a strong background in economics, Panetta has little hands-on experience in intelligence. But he is known as a strong manager with solid organizational skills.

Sen. Dianne Feinstein, who will be the new chairwoman of the Senate Intelligence Committee, said she had not been told in advance of Panetta's selection.

"My position has consistently been that I believe the agency is best served by having an intelligence professional in charge at this time," the California Democrat said.

But Sen. Ron Wyden, a senior member of the Intelligence Committee, said he was consulted on the pick and praised Panetta.

"I believe he has the skills to usher in a new era of accountability at the nation's premier intelligence agency," said Wyden, D-Oregon. "For too long our nation's intelligence community has operated under a policy of questionable effectiveness and legality in which consulting two members of the Senate Intelligence Committee counted as 'consulting with Congress.' "

Rep. Pete Hoekstra, the ranking Republican on the House Intelligence Committee, wouldn't comment until Obama makes an announcement, but his spokesman said that Hoekstra "has called for a new direction and a change in the culture a the CIA for some time."

"Whether it is Leon Panetta or someone else, it is important the agency move in a new direction," Jamal Ware said.

Blair, 61, was a 1968 graduate of the U.S. Naval Academy and attended Oxford University in Britain as a Rhodes scholar at the same time as Clinton. Blair retired from the Navy in 2002.

He was the CIA's first associate director of military support and served on the National Security Council.

"I am in awe of the sophisticated strategies that American politicians can devise and pursue over many years," he told a House panel in July. "They involve very public activities -- speeches, programs, alliances -- but also backroom deals, and stratagems, tactical flexibility but strategic constancy, investment in intellectual and organizational capabilities that will not pay off for years.

"I have yet to see these same brilliant politicians come up with similar strategies to advance the national interest when they come into national office. Our national strategies show little of the depth, brilliance and effectiveness of the domestic political strategies this country produces."

Blair also is known in Navy circles for once trying to water-ski behind the destroyer he skippered, the USS Cochrane.